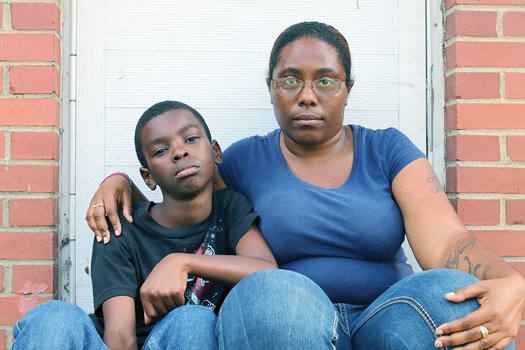 Javian Buffaloe finally was able to start middle school on Tuesday — two weeks after classes began for most Richmond students.

The 12-year-old expected to start sixth grade at Martin Luther King Jr. Middle School on Sept. 2. He looked forward to joining friends and peers from Woodville Elementary School in moving from fifth grade to middle school.

But something happened to Javian’s records.

“When I took him to the school, I was told he couldn’t stay because he wasn’t on the attendance rolls,” said his mother, Tiffany D. Buffaloe.

As a result, Javian missed the first two weeks of the school year.

His case is a prime example of numerous snafus plaguing the school district this year that prevented some students from entering class.

Ms. Buffaloe does not know whether anyone at MLK ever sought to find out what happened to the file on her child, whom she said had attended Woodvillle for four years and Chimborazo Elementary before that.

Nor does she know if anyone checked to find out about her son’s individual education plan, which was created at Woodville after Javian was diagnosed with a learning disability.

What she does know is that she was forced to go through the process of enrolling her son as if he had never been in a city school.

The process moved slowly because she had to spend time digging up Javian’s birth certificate and other paperwork she previously had provided the elementary school.

It also took until Sept. 12 for MLK to confirm that Javian had received the immunization booster shot for tetanus, diphtheria and pertussis that is required of all students entering middle school.

Ms. Buffaloe said that when she brought Javian to school Tuesday, the counselor had his original folder. The only explanation she received was that “his records had not been updated,” she said.

“I think he should have a chance to learn like everyone else,” she said. “What happened to him is just wrong.”

The specifics of what happened are not being released. Cletisha Lovelace, school system spokesperson, said based on policy, “under no circumstance is any school permitted to deny a child’s entry into school based on the absence of any academic or transfer records.”

“It is my understanding that there were some unique circumstance surrounding this particular matter,” Ms. Lovelace stated. “I am not at liberty to disclose those circumstances.”

She noted, though, this was the first case like Javian’s that she has been told about.

Another snafu affected 40 to 50 students at Lucille Brown Middle School on South Side.

For more than a week after classes began, a scheduling mix-up kept them out of classes in core subjects. They were sent to a multipurpose room to wait until they received all of their class assignments. They went to some classes but not others.

Ms. Lovelace confirmed last week that those students “were without complete schedules” when classes began Sept. 2. It was the largest problem of its kind that the school system faced, although Ms. Lovelace said other schools may have dealt with problems on a smaller scale.

Ms. Lovelace said the students were supervised and were provided computers to play video-style educational games. She acknowledged that this was not ideal.

She said the problem grew out of the school district’s new effort to ensure that all middle school students are taking four classes daily in core subjects of English, math, science, history or social studies. Electives also are assigned.

Superintendent Dana T. Bedden sent a team from the central office to assist the school with overcoming the scheduling problem. The team worked over the weekend of Sept. 6 and 7 to try to clear up the problem, Ms. Lovelace said.

The situation largely had been cleared up by the end of last week, she said.

Still, there are lingering concerns about class sizes. For example, at Lucille Brown, which was accredited with warning, the average class has 25 to 30 students.

Such classes are regarded by most educational experts as too large for a teacher to be able to give struggling students the individual attention they need.

As for Javian, Ms. Buffaloe said Tuesday that she’s happy he is finally in school.