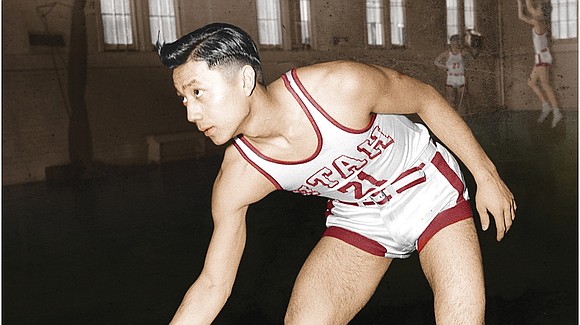 During the height of World War II, Wataru Misaka became the first player of color in the NCAA basketball tournament in 1944.

COVID-19 has done what World War II couldn’t. It has put a halt to one of America’s sporting treasures – the NCAA basketball tournament.

In 1944, the United States was waging all-out war in Europe and the Pacific Theater. A hard-to-fathom total of some 16 million Americans served in some capacity.

Still, the basketball beat went on.

Also in 1944, the University of Utah was the unlikely NCAA champion with a most unlikely hero, Wataru “Wat” Misaka, a 5-foot-7, 150-pound second-generation Japanese American, or Nisei.

He sped around the court in size 7 Converse sneakers.

Raised in Ogden, Utah, by Japanese parents who were immigrants, Misaka became the first person of color to play in the NCAAs.

Later, he became the first non-white male to play in the NBA. That was in 1947 with the New York Knicks.

Misaka could have been angry about America’s treatment of its citizens of Japanese ancestry. About 160,000 JapaneseAmericans were detained in internment camps from 1942 to 1945. If he was bitter, it didn’t show.

After helping Utah win the 1944 NCAAs, he dropped out of school to serve the next two years in the U.S. Army, rising to the rank of staff sergeant.

Many colleges shut down, or streamlined, their athletic programs during the height of the war. In fact, 1943 NCAA finalists Wyoming and Georgetown did not field teams in 1944.

As a member of the Skyline Conference, Utah continued building a western powerhouse through the war years.

The Utes would finish the 1944 season at 18-3, but it took a vehicular collision on a highway in Arkansas to enable the Utes to slip into the NCAA eight-team field.

The University of Arkansas, an original tournament selection, backed out following a bus accident in which two of its best players were seriously injured.

That opened the door for Utah, and the Utes seized the opportunity. Utah defeated Missouri 45-31 and Iowa State, 40-31, both in Kansas City, to punch its ticket to the final.

On the brightest stage in New York, Utah topped Dartmouth in overtime, 42-40, before a packed house at Madison Square Garden.

Throughout the tournament, there were streams of bigoted and threatening insults hurled Misaka’s way from the grandstands.

He never let the angry taunts force him to lose focus.

In the championship game, Misaka, the lead ball handler and defensive catalyst, scored four points while playing 41 of the 45 minutes.

Arnie Ferrin, with 24 points, was named MVP before embarking on a successful career with the Minneapolis Lakers.

While Ferrin went directly to the NBA, Misaka spent 1945 and 1946 in the military.

He returned to Utah in 1947, helping the Utes to the National Invitation Tournament title, also at Madison Square Garden, by defeating Kentucky.

In the NIT finals, Misaka held Kentucky All- American Frank Beard to a single point.

Misaka played only briefly for the Knicks in the 1947-48 season before being cut at midseason.

At that juncture, he turned down an offer to play for the Harlem Globetrotters, preferring to return to Utah and earn a degree in electrical engineering.

Had he signed with the Globetrotters, he would have become first non-African-American to play for the touring group.

He is remembered as a trailblazing athlete who broke down barriers and wouldn’t let anything stop him or his teams – not even World War II.