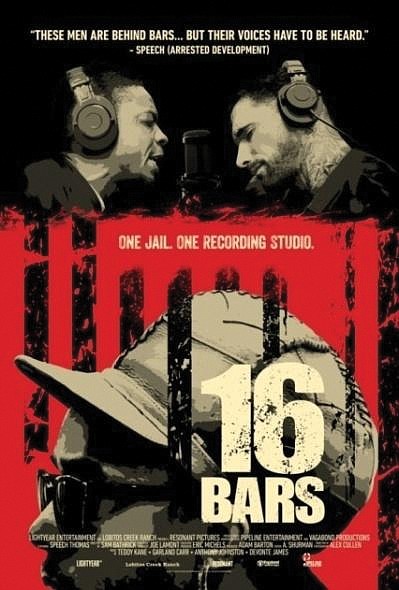 It already has been seen in Charlottesville, San Francisco, Los Angeles and New York.

Now, a 94-minute documentary is finally set to debut in Richmond about four current and former inmates and their personal stories told through music at the Richmond Justice Center with the help of Grammy Award-winning hip-hop artist Todd “Speech” Thomas.

Titled “16 Bars,” the documentary will premiere in Richmond at a sold-out screening 7 p.m. Thursday, Nov 14, at the Bow Tie Cinema’s Movieland at Boulevard Square, 1301 N. Arthur Ashe Blvd. The film also will be screened there from Friday, Nov. 22, through Thursday, Nov. 28.

Along with the documentary, Mr. Thomas, front man for the iconic group Arrested Development, has released an album also titled “16 Bars.” Featuring music ranging from rap to country, the album also includes a gospel song that features a choir of inmates recorded in the jail’s cafeteria.

Mr. Thomas has said any profits would go to the inmates.

The film, though, is centered on the workshop that Mr. Thomas led with the creative quartet, Garland Carr, De’Vonte James, Anthony Johnson and Teddy Kane, for 10 days in 2017 with the approval of then-Richmond Sheriff C.T. Woody Jr.

Inmates used a makeshift recording studio inside the Justice Center to make music as a reward for doing well in an addiction recovery program called REAL, Recovery from Everyday Addictive Lifestyles.

The sheriff opened the jail to documentary filmmaker Sam Bathrick of Resonant Films and Mr. Thomas as a way to showcase the recovery program and the challenges and frustrations inmates face inside and outside, including the potential for renewed sub- stance abuse and homelessness.

Mr. Thomas, who is based in Atlanta, got involved after seeing a report on another program Sheriff Woody pioneered, a father-daughter dance involving inmates and their children.

“My manager, Joe Lamont, and I were deeply moved by a CNN special about the dads and daughters dance for inmates in the Richmond correctional facility,” Mr. Thomas said. “(Joe) reached out to (the sheriff) to see if I could go in and write music with them. It took around two years, but we finally got to do it.” For Mr. Thomas, it was a mission to help others get their stories and music out. “These men are behind bars,” he previously said, “but their voices have to be heard.”

Mr. Bathrick praised the access arranged through former Sheriff Woody and REAL’s director at the time, Dr. Sarah H. Scarbrough, who now operates a nonprofit she founded in Downtown, REAL Life, to assist inmates to stay on the recovery path after they leave jail.

Mr. Thomas has said he wasn’t sure what he would find when he got to the Justice Center, but noted that the most memorable part was finding the level of creativity among the incarcerated men.

“I was blown away by the talent I found,” he said, adding that he never expected to work with people who were so gifted and had such strong musical backgrounds. He cited Mr. Carr, who is Caucasian, as a man who had allowed his potential to be sidelined by his personal challenges.

The goal of the documentary, Mr. Bathrick has said, is to tell a small story about inmates, how they got there and their efforts to change their lives. He described it as “one small snapshot” that focuses on the people who are serving or have served time without decrying the jail or what has happened to them.

The movie essentially allows the men to tell their stories and describe their difficulties in breaking the cycles of addiction, crime and incarceration. As one example, Mr. Kane, who was allowed to return to the jail to take part in the recording sessions after Mr. Thomas heard his demo tapes, relates how difficult he found a job interview.

The Virginia Film Office got involved in backing the project, which premiered at the Virginia Film Festival in Charlottesville in November 2018 and was featured in May at the DocLands Documentary Film Festival in San Francisco. It has since been shown in Los Angeles and most recently spent a few days in New York. Along with stopping in film houses, Mr. Bathrick’s goal is to have the film shown in jails and prisons across the country.