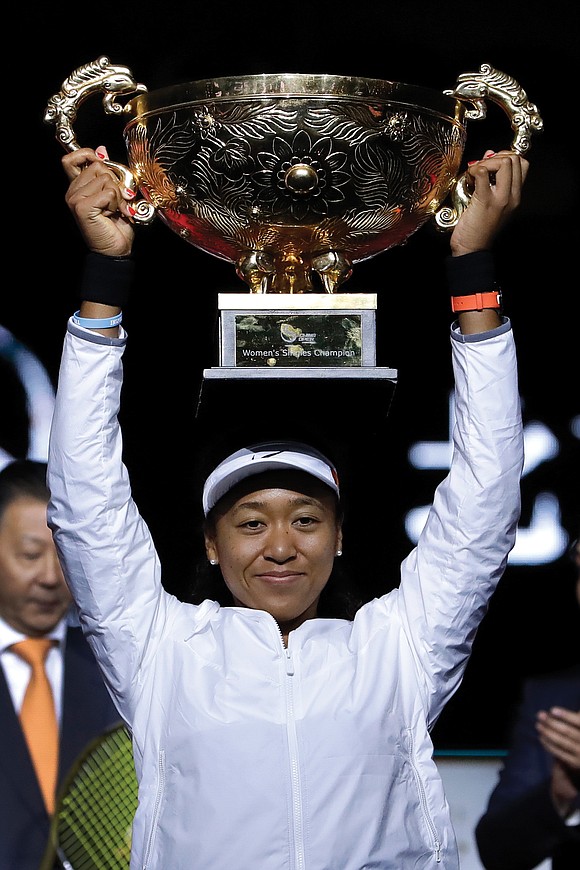 Naomi Osaka lifts high her winner’s trophy after defeating Ashleigh Barty of Australia in the women’s final at the China Open tennis tournament in Beijing on Oct. 6. Photo by Marck Schiefelbein/Associated Press

Coco Gauff is still just 15. She also is already the owner of a WTA singles title. The American beat 2017 French Open champion Jelena Ostapenko 6-3, 1-6, 6-2 in the final of the Upper Austria Ladies tournament Sunday, making Gauff the youngest winner of a singles trophy on the WTA tour since 2004.

“This is a special moment for me,” Gauff said.

And Gauff managed to do it after losing in the last round of qualifying, then moving into the main draw as a “lucky loser” when another player withdrew from the field.

“I’m still overwhelmed and shocked,” Gauff said, according to the WTA’s website. “I guess it’s crazy to say it’s my first WTA title. This was definitely not on the calendar at the beginning of the year, because I didn’t think I’d have a chance to get in. And now I’m the champion, so it’s crazy.”

This week’s run, which included a victory over Kiki Bertens for her initial Top 10 win, was the latest impressive performance for Gauff, who, as a result, rose 39 spots in the rankings to become the new WTA World No. 71.

She was just 313th when Wimbledon began on July 1. That’s when she burst onto the scene as the youngest qualifier in tournament history, then beat five-time champion Venus Williams along the way to making it to the fourth round.

Gauff claimed her first WTA doubles title in Washington in August, pairing with Caty McNally, before getting to the third round in singles at the U.S. Open.

Meanwhile, Florida’s Naomi Osaka, who was ranked No. 3 by the WTA on Monday, has taken steps to give up her U.S. citizenship to play for Japan in the 2020 Olympics, Japanese media said last week.

Osaka, 22, who was born in Japan to a Haitian father and Japanese mother but raised in the United States, currently has dual U.S.-Japan citizenship. She told NHK it will be special for her to represent host Japan at the Tokyo Games, the public broadcaster said.

Osaka faced a deadline to relinquish one nationality because neither Japan nor the United States permits dual citizenship for adults.

The Japanese Olympic Committee and a U.S.-based agent for Osaka in the United States could not be reached for comment.

Japan, which has long prided itself on being homogeneous, is becoming more ethnically diverse. But prejudice remains against “haafu,” or half-Japanese, including cases of bullying against mixed-race children.

And while Japan has largely embraced Osaka, she still faces some indignities.

Two weeks ago, Osaka laughed off comments by a Japanese comedy duo who said she was “too sunburned” and “needed some bleach,” and turned the tables with a plug for Japanese cosmetic giant Shiseido, one of her sponsors.