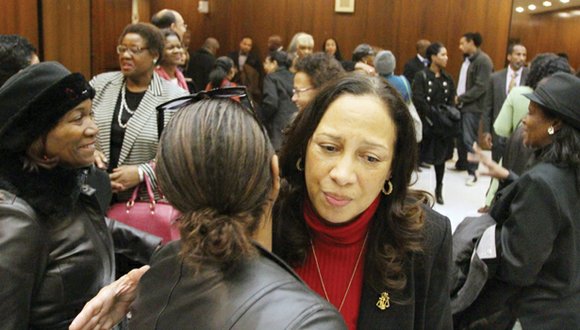 Embattled Judge Birdie Hairston Jamison defended her record on the Richmond General District Court and urged skeptical legislators to re-elect her to a new term.

“I want to be able to continue doing the great job that I have been doing,” the 57-year-old jurist told a panel from the House and Senate Courts of Justice committees considering whether to recommend her for re-election to a fresh six-year term.

During her interview last Friday evening, Judge Jamison pushed back against unfavorable results from a confidential survey of lawyers who have appeared before her in the past 12 months.

The surveys are a new evaluation tool the committees appear to be relying on in making their decisions, despite Judge Jamison and several lawmakers questioning the credibility of results.

“I cannot reconcile these results with what goes on in my courtroom,” Judge Jamison said in decrying the use of a survey of “anonymous lawyers” to justify ending her 23-year tenure.

She said she has heard more than a million cases since her appointment to the bench in 1991 and never had a complaint about her conduct referred to the state’s judicial review commission.

She noted her docket regularly includes hundreds of cases, but she said she does her best to be fair, patient and respectful.

At least 50 people, including several attorneys, packed the hearing room in a show of support for Judge Jamison. It was the largest entourage of support for any of the 32 sitting judges who appeared before the panel last week.

No decisions were made; that will happen when the General Assembly reconvenes Jan. 14. Both the House and Senate committees must endorse a judge in order for the judge’s nomination to go before the full body for re-election.

Judge Jamison is rated a long shot, at best, to win a new term, along with several other circuit and district court judges among the 33 in Virginia whose terms are up in 2015.

Only 20 judges were evaluated through the new survey program. And Judge Jamison, the only Richmond judge facing re-election, ranked at the bottom in the results.

Richmond Delegate G. Manoli Loupassi, who chairs the House judicial selection subcommittee, chaired the interview panel. He was among members who expressed concern about the high percentage of attorneys who rated Judge Jamison as needing improvement in such areas as fairness, consistency and respect.

During the interview, Delegate Loupassi repeatedly said being a “judge is a privilege, not a right.” He stressed over and over the need for judges who “are fair, are patient and show respect” for those who enter their courtroom.

He expressed concern that nearly 45 percent of the attorneys found her unsatisfactory or needing improvement in her overall performance, 42 percent rated her as unfair and 47 percent found her lacking in respect for all court participants.

Judge Jamison said she couldn’t understand how she could receive such evaluations when “more than half the lawyers rate me as good or excellent.”

She said one reason could be that she rejects plea deals in drunken driving cases that do not comply with state law — creating unhappiness.