Miller out at VSU 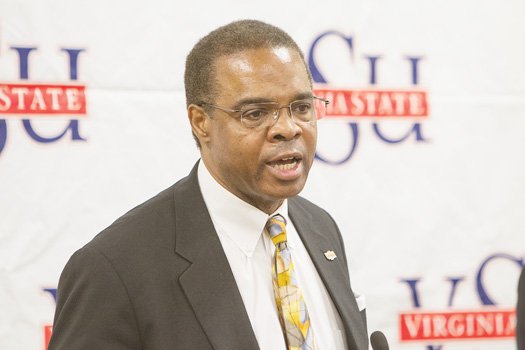 “Great things are happening at VSU!”

It’s ironic because the president just announced his resignation.

Dr. Keith T. Miller handed in his notice last Friday at the start of a closed-door meeting of the university’s board of visitors. His resignation comes four and a half years after taking the helm of the 132-year-old institution and more than two years before his contract was to expire.

He negotiated a “golden parachute” ahead of the special meeting.

Harry Black, the board’s rector, later disclosed that Dr. Miller, 59, will receive his base pay of $356,324 for an additional 12 months while on sabbatical or leave. After that, he could return to VSU as a tenured professor if he chooses.

“President Miller is to be commended for his integrity and putting the interests of Virginia State University and its students at the forefront of this difficult decision,” Mr. Black stated in a press release issued after the meeting.

Dr. Miller, who arrived at VSU in the summer of 2010 to take over from 17-year president Eddie N. Moore Jr., officially will step down Dec. 31.

The board plans to choose an interim president during its next regular meeting Nov. 13-14. A national search will begin next year for a replacement to serve as the university’s 14th president.

“I think we’ve had a nice run,” Dr. Miller said after leaving the board meeting. He called VSU “a great place with a terrific future.”

Both Dr. Miller and the board agreed on the need for new leadership for the historically black university that has been walloped by shrinking enrollment and financial stress, Mr. Black said.

Looking ahead, the focus of the national search is likely to be on attracting a person with strong HBCU experience and connections that Dr. Miller lacked, as well as demonstrated management and administrative ability, several board members said. Previous fundraising success also could be a factor.

Dr. Miller ran into trouble when he was unable to stem the decline in student enrollment, which has fallen by more than 1,000 students in the past two years. That is a reversal from the growth enjoyed initially by Dr. Miller and by his predecessor, Mr. Moore, now president of Norfolk State University. Just two years ago in 2012, VSU enrolled 6,200 students, the most in its history.

However, this fall, VSU reported 4,995 undergraduate and graduate students enrolled, and the university expects 300 to 400 fewer students to be on campus during the spring semester because of the number of seniors graduating in December.

The result of VSU’s sagging enrollment: A $19 million revenue shortfall that forced cutbacks that are biting into university services.

The most serious problem stems from debt the university ran up building new dorms and apartments. The budget approved by the board of visitors in June projected 900 more students to stay in university-owned housing than actually occurred.

That alone created $12 million of the $19 million revenue loss, according to VSU documents. And there is every indication dorm use could remain low and create additional headaches in the 2015 and 2016 budgets. Loss of tuition from lower enrollment and reduced federal and state funding accounted for the rest of the revenue drop.

More impacts could be felt as VSU adjusts spending. The Free Press has been told VSU could lay off at least 100 staff and adjunct faculty after the fall semester ends this month.

The slide in enrollment cost Dr. Miller the support of the majority of the board, according to insiders, and drew concern from Gov. Terry McAuliffe’s administration, which hinted strongly the school needed a change at the top.

Dr. Miller also found himself the subject of student protests. Before his resignation, the board of visitors received a petition signed by 950 students urging the replacement of the president and top members of his administration.

Dr. Miller may have seen the handwriting on the wall months ago. Last spring, he joined California-based Penson Associates Inc., a private consulting firm made up of ex-university presidents. So far, Dr. Miller has not undertaken any projects for the firm, according to Penson CEO Sal Rinella, but Dr. Miller is listed as available.

As the university’s 13th president, Dr. Miller stated on the VSU website that he had made it a top priority to establish VSU as a catalyst for innovation in higher education.

His top achievements, according to the university, include expanding the VSU Honors Programs and ensuring the start of an $84 million convocation center now being built on the campus. It is the largest single project VSU has ever undertaken.

On the president’s page, Dr. Miller cites his “Building a Better World” initiative. He states the initiative is allowing VSU to improve its offerings in science, technology, engineering, health care and business and positioning VSU as a top institution for higher education in Virginia and the nation.

He also claims on the website that he has strengthened partnerships with governments, the business community and nonprofits to benefit the school and its students.

Dr. Miller, who earned his bachelor’s, master’s and doctorate at the University of Arizona, came to VSU after serving six years as president of Lock Haven University in Pennsylvania.

According to his biography, his academic career began in 1987 as an assistant business professor and director of the campus MBA program at Fairleigh Dickinson University in New Jersey.

By 1991, he was associate dean of the School of Business at Quinnipiac College in Hamden, Conn.

He later served as the dean of the College of Business at Niagara University in New York and as provost and vice chancellor of the University of Wisconsin-Oshkosh before becoming president of Lock Haven.

He and his wife, Nicolette, are the parents of three children. The couple lives in Chester.