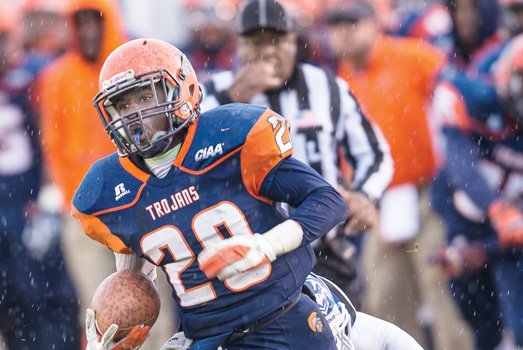 North Carolina schools have won the CIAA championship every year since 2001, not counting last year when the title game was canceled following an altercation between players.

Shrinking CIAA/Virginia: Not so long ago, there were five CIAA football schools located in the commonwealth.

What’s ahead: The CIAA Southern Division crown will be determined Saturday by Winston-Salem State at Fayetteville State, with the WSSU Rams the prohibitive favorite.

It’s questionable whether Sims will play in Saturday’s game at Fayetteville, but he should be fully recovered by the CIAA title game if the Rams make it that far.

Johnson was All-CIAA last year as a junior. He was a central figure in the ugly fisticuffs incident that resulted in cancellation of last year’s championship game between Winston-Salem State and VSU.

Sims is a former starter at Alabama and Virginia. He was among the nation’s top-rated high school quarterbacks as a senior at Oscar Smith High School in Chesapeake.