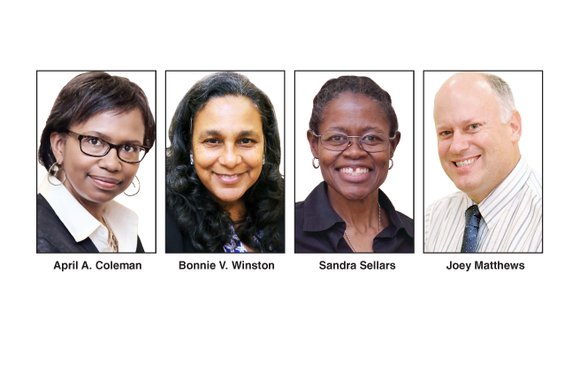 The newspaper was recognized with 21 awards — including seven first place awards and a Best in Show Award — at the annual Virginia Press Association competition in writing, photography, news presentation and advertising.

The contest for work published in 2014 was judged by members of the Oregon Newspaper Publishers Association. Winners were announced April 18 at the VPA’s awards banquet in Roanoke.

His entry included a trio of articles on the death last year of 8-year-old Marty Cobb who was killed trying to protect his older sister; an Albert Hill Middle School coach returning to her team after suffering a stroke; and a mother and son incarcerated at the Richmond City Jail trying to break what had become a family cycle.

Her photo, “Kiss,” caught two women locked in embrace moments after they wed in an impromptu ceremony on the courthouse steps in Downtown when same-sex marriage was declared legal in Virginia last year.

Ms. Sellars’ photo was called “excellent” by the judges. “Captures the joy and chaos of this breaking news story.”

Her photo, “Vigil,” of three young children attending a neighborhood memorial vigil for their slain friend Marty Cobb, was described by the judges as “poignant,” capturing the pain and grief of a difficult event to cover.

“The photographer demonstrated remarkable eye for the story and skill to get the shot,” the judges wrote. The photo won Ms. Sellars top honors in the general news photo category.

• Brittany Hughes, black and white ads in the education and churches, professional/technology services, fashion and personal care and entertainment categories

•April A. Coleman, lifestyle or entertainment pages, and black and white ads in the education and churches and entertainment categories