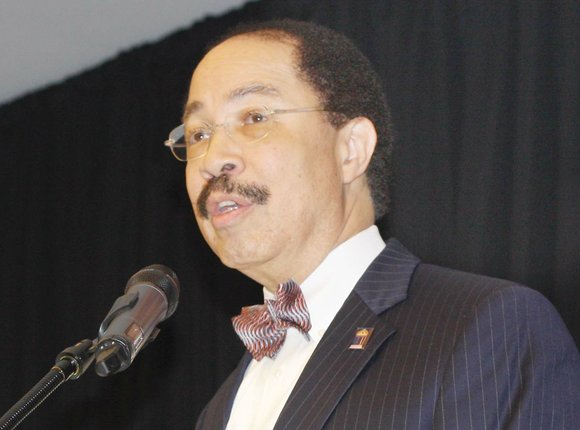 “What could it be but love?” Mr. Martin asked, of their service.

VUU President Claude G. Perkins noted that the importance of the annual gathering to honor Dr. King is “to talk about com- mitment, tolerance and respect and deliberations to make this world a better place” for all.

Dr. W. Franklyn Richardson, chair of the Virginia Union University board of trustees, presented the Martin Luther King Lifetime of Service Award to VUU alumnus Simeon Booker of the Class of 1942, a trailblazing journalist for more than five decades.

Known as the “dean” of black journalists, Mr. Booker, now 96, has won numerous awards for his coverage of the Civil Rights Movement for Jet and Ebony magazines. He also was the first African-American reporter for the Washington Post. His coverage of the 1955 murder of 14-year-old Emmett Till in Mississippi and the subsequent trial is one of the most noted pieces of journalism from the era.

Mr. Booker said he gained his motivation to write from a desire “to stand against the segregation of my people.”

The Rev. Benjamin P. Campbell, director of Richmond Hill, called for social justice in his opening prayer, including a regional expansion of public bus services so that Richmonders may have greater access to jobs and other services in surround- ing counties.

The breakfast attracts a “who’s who” of elected officials, business leaders, human rights activists and other community members.