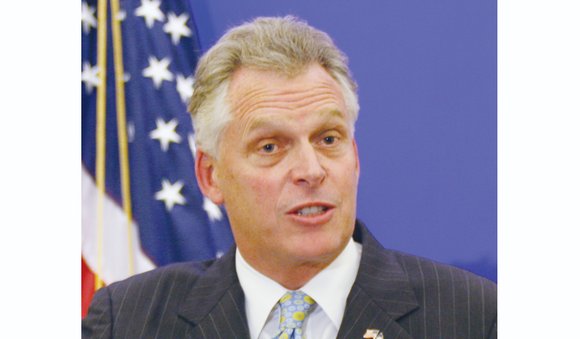 Gun-toting Virginians, except for law enforcement and military personnel, are to be banned from state office buildings — even if they have concealed weapons permits.

Separately, judges are to be encouraged to force people involved in domestic violence to surrender guns they own if they are subject to protective orders.

And the Virginia attorney general would have new authority to prosecute illegal gun sales.

In response to mass shootings in Virginia and across the nation in recent months, Gov. Terry McAuliffe announced these steps in a bid to make a dent in gun violence.

The changes are included in an executive order the governor issued last week as he followed through on his promise two months ago to step up efforts on gun control following the on-air murders of a Roanoke TV reporter and cameraman.

How much Gov. McAuliffe will be able to accomplish through his order remains to be seen. His steps already are receiving pushback from gun-control opponents, who are threatening to sue or change state laws to maintain their right to “open carry” weapons everywhere, including in state offices. State law now makes it legal to do so, except in such places as schools, courtrooms and airports.

A gun-owner himself, but a supporter of “common sense regulation,” Gov. McAuliffe is using his executive powers to take steps largely because he has failed to make any headway on gun control in the Republican-dominated legislature. The General Assembly has sought to eliminate all regulation of gun sales and to make it easier for everyone to own and carry weapons.

“There is no magic solution to curbing gun violence,” the governor stated, but he believes officials must do what they can to try to reduce the killings and the anguish they cause.

In his order, he directed enforcement of existing laws, handing Attorney General Mark Herring and others the task of formulating a “creative and aggressive” crackdown on illegal sales of guns.

The task force, include representatives of federal, state and local law enforcement agencies and prosecutors, also is directed to focus on two “key protections: Ensuring that only licensed dealers engage in the business of selling firearms and that persons prohibited from owning firearms are prevented from having them.”

The governor also directed the State Police to set up a tip line to allow Virginians to report illegal gun sales and other gun crimes, and to take steps to request that every weapon used in a gun crime in the state is traced to its source.

The ban on weapons in state offices will take at least a month or more to take effect to give time for agencies that manage buildings to issue new rules. The ban on concealed weapons could take additional time to go through the regulatory process.