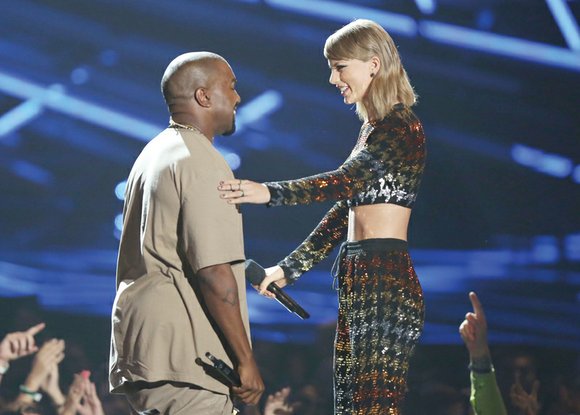 Kanye West and Taylor Swift — together again — as she welcomes him to the stage. Photos by Matt Sayles/Invision/Associated Press

Nicki Minaj performs Sunday for an enthusiastic audience at the MTV VMAs.

Taylor Swift may have won the most Moonmans on Sunday, but it was her reunion with rapper Kanye West on the MTV Video Music Awards stage that stole the show, as Kanye declared he will run for the U.S. presidency in 2020.

Kanye, who famously stormed the stage and snatched the microphone from Ms. Swift in 2009 during her acceptance speech, was given the Michael Jackson Video Vanguard award on Sunday by Ms. Swift, in a VMA moment that came full circle.

“Everyone in the world knew about our infamous encounter at the VMAs, but something you may not know is Kanye West’s album ‘College Dropout’ is the very first album I bought on iTunes,” Ms. Swift said.

She added, in a parody of Kanye’s 2009 speech when he hijacked her award, “to all the other winners tonight, I’m really happy for you and Imma let you finish, but Kanye West has one of the greatest careers of all time.”

After a standing ovation, West rehashed the 2009 incident along with many other musings on the authenticity of artistry, at one point criticizing awards shows and MTV for replaying the incident over and over for “more ratings.”

“If I had a daughter at that time when I went on stage and grabbed the mic from someone else ... after that night, the stage was gone, but the effect it had on people remained,” he said. He ended his speech by declaring, “I have decided in 2020 to run for president,” quickly riling up social media.

Ms. Swift won video of the year, the night’s top award, for the star-studded music video of her revenge song “Bad Blood,” which is reportedly about her feud with singer Katy Perry.

“I know there’s been a lot of discussion about what this video means, but I’m just happy that in 2015 we live in a world where boys can play princesses and girls can play soldiers,” the 25-year-old singer said.

Perry did not attend this year’s awards show.

Viacom Inc.-owned MTV hands out Moonman statuettes during the annual VMA ceremony for the year’s top achievements in music videos. However, the ceremony is better known for delivering irreverent and unexpected moments.

Sunday’s show was all about the shock factor as a scantily clad Miley Cyrus, 22, cursed her way through her hosting duties, flashed her bare breast accidentally and performed a new song about smoking marijuana.

Singer Justin Bieber returned to the VMA stage after a two-year break to perform two new tracks, tearing up at the end of his performance.