Kemba Smith, whose prison sentence was commuted in 2000, dines with President Obama after meeting with White House aides 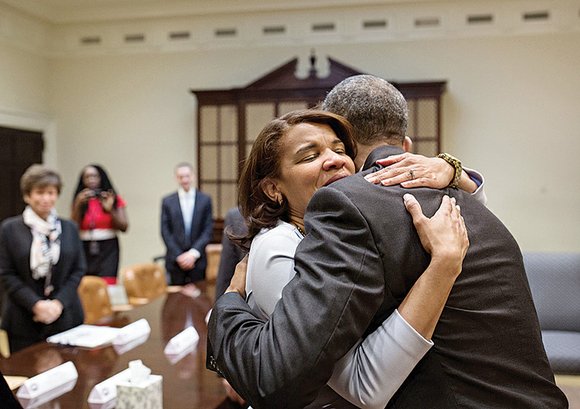 Kemba Smith, a former Henrico resident, hugs President Obama during a meeting March 30 in the Roosevelt Room of the White House with former federal prison inmates whose sentences have been commuted. Pete Souza/Official White House photo

Special to the Richmond Free Press

When U.S. Sen. Barack Obama was making his initial bid to become president of the United States, Richmond native and 1989 Hermitage High School graduate Kemba Smith was among the thousands volunteering in his ambitious history-making campaign.

Ms. Smith worked to get people to register to vote and go to the polls on Election Day, despite the fact her legal status as a felon barred her from voting in the 2008 election.

By 2012, with her voting rights restored, she was among the millions who helped President Obama win re-election to a second term.

A chance to vote for the nation’s president in 2008 may have seemed improbable to Ms. Smith in 1994. That’s when the former Hampton University student pleaded guilty to violating federal drug laws and was given a 24½-year federal prison sentence with no chance for parole, despite being a first-time, nonviolent offender. The idea of someday meeting a president face-to-face, with chat time and lunch to boot, was even harder to imagine.

Ms. Smith, now a Virginia Union University graduate and sentencing reform advocate, was in the nation’s capital as a White House guest participating in a discussion with four former federal prison inmates about life after their sentence commutations. The meeting was with a few top Obama aides, including the president’s senior adviser Valerie Jarrett and White House counsel Neil Eggleston. They were working on better understanding what help federal prisoners need after their sentences are commuted, as was the case with Ms. Smith and the other guests.

As the candid discussion ended, a surprise guest entered the small room adjacent to the Oval Office. It was President Obama himself — the nation’s president, a top world leader, the man!!!

Ms. Smith and her peers were nearly speechless.

As they sought to grasp the meaning of the moment, President Obama thanked them for sharing their time and thoughts with his aides. He shook each person’s hand and got a big hug from Ms. Smith and several others.

“I sure hope I’ve made you proud,” Ms. Smith said the president told them.

Then, adding to their surprise, President Obama invited the small group to lunch so they could talk more. Within a few minutes, Ms. Smith and the cadre of about a half dozen people were in White House vans, their presidential motorcade zipping through busy downtown Washington streets with sirens blaring en route with President Obama to a private lunch at a popular local restaurant.

President Obama talks during an informal lunch last week at a Washington restaurant with top aides and four individuals who previously served time in prison, including Kemba Smith who grew up in Henrico County.

“I still can’t believe I’m having lunch with the president,” Ms. Smith said in an interview after her White House visit on March 30. “It was just like meeting with family. He was very himself — down to earth,” said Ms. Smith.

She had much to say when President Obama asked her to talk about her experience in prison and afterward, when President Bill Clinton commuted her sentence in December 2000 to the six and a half years she had served.

“I told him our parents are our heroes,” Ms. Smith said, referring to her mom and dad, Odessa and Gus Smith of Henrico, who raised her son, Armani, during her time in prison. She said they sacrificed their careers and much of their lives to save their only child from more than two decades behind bars. Other former inmates in the group echoed Ms. Smith in talking about the value of family ties while in prison and later, after their release.

As Ms. Smith talked to the president about her son, who is set to gradate next month from Washington & Lee University in Lexington, she sensed she might be gloating too much. She said she offered a polite apology if she seemed to be talking too much about her 20 year-old, who was born while she was incarcerated in Richmond awaiting trial. She is now married and lives in Hampton Roads with her husband, an air traffic controller, her son and her younger daughter.

“President Obama said, ‘You go ahead. That’s what Mamas do,’ ” Ms. Smith recounted the president saying with a friendly smile.

Before the lunch meeting fully soaked in, Ms. Smith and her peers were back at the White House, with President Obama wishing them well and thanking them again for their input.

The magic of the moment didn’t eclipse the purpose of Ms. Smith talking about life after prison and making a case for commuting the sentences of more people. She said she and the others urged President Obama to do more before leaving office next January, asserting it was a necessary move to reverse a generation of harsh public policy incarcerating people who played marginal roles in illegal drug activities.

That same morning, the White House announced President Obama granted commutations to 61 federal prisoners — including a Charlottesville man — who were serving time under “years of out-dated and unduly harsh” sentencing laws.

The next day, as part of its focus on criminal justice reform that President Obama calls “Second Chance,” the White House hosted a briefing on “Life After Clemency.” It included Ms. Smith and the three other former federal prisoners.

It was a tearful, public coming to grips that reminded everyone listening of the terrible damage a conviction and harsh prison sentence impose on more than just the person convicted of a crime.

“For me, it was phenomenal,” Ms. Smith said of the meeting with President Obama, his aides and the three other former inmates. She noted that the president had stepped beyond the ranks of those who assert people who have been to prison are “scum.”