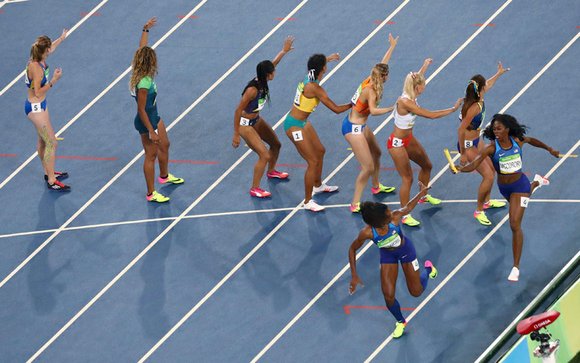 Francena McCorory represents the gold standard of track and field in Virginia.

The 27-year-old added a second gold in the 4x400 relay at the Olympic games in Rio de Janeiro.

McCorory helped Team USA to a first place finish in the semifinals. She did not run in the finals, but still qualified for individual gold.

At the London Olympics in 2012, McCorory ran in both semifinals and finals as the U.S. won gold in the 4x400.

McCorory remains the NCAA and American record holder in the 400 meters and set a national high school record at Hampton’s Bethel High School.

McCorory was among numerous standouts from historically black colleges and universities who competed in the Rio Olympics. Not all were on Team USA. Several HBCU stars competed for their home countries.

Chris Brown, a former Norfolk State University standout, will turn 38 on Oct. 15 and still competes with the planet’s fastest quarter-milers.

The Bahamas finished behind the United States and Jamaica in that event.

Brown knows the way to podium.

He helped his homeland to silver in the same event in the 2008 Olympics in Beijing. In 2004 in the Athens Olympics, he was part of The Bahamas’ bronze medal team in the 4x400.

The former NSU Spartan has a street named in his honor on the island of Eleuthera, where he was born.

The best long jumper in the world attended an NCAA Division II college in Tuscaloosa, Ala.

Henderson, a native of McAlmont, Ark., had won the NCAA Division II long jump and 100 meters for Stillman in 2013.

From a track and field standpoint, the “C” in CIAA might stand for Caribbean.

The CIAA was well represented in Rio, with Johnson C. Smith University Coach Lennox Graham serving as an assistant coach for the Jamaican team.

Graham is a native of Jamaica.

Graham’s Golden Bulls athletes qualifying to compete in Rio were high hurdler Shermaine Williams, who raced for Jamaica, and Kendra Clarke, who ran for Canada in the 4x400 relay.

Also, St. Augustine’s University Coach George Williams was in Rio serving as a personal coach for four of his Falcons — sprinter Burkheart Ellis, hurdler Tia-Adana Belle and sprinter Ramon Gitten, all of whom competed for Barbados, and hurdler Roxroy Cato on Team Jamaica.