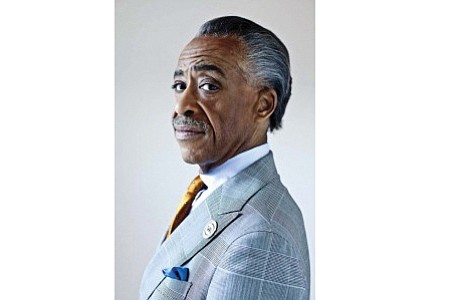 The Rev. Al Sharpton, head of the National Action Network, has announced that a coalition of civil rights and advocacy organizations will lead a march and rally at the Dr. Martin Luther King Jr. Memorial in Washington on Saturday, Jan. 14 — less than a week before the inauguration of President-elect Donald Trump.

The event will be held during the weekend leading up to the annual holiday honoring Dr. Martin Luther King Jr., and just days before the Jan. 20 presidential inauguration.

“There’s no more appropriate time for civil rights leaders, faith leaders and others to raise to this nation that we cannot have the dream and principles of Dr. King violated as we go into a new administration,” Rev. Sharpton said at a news conference Monday at the National Press Club in Washington.

“On the areas of voting rights, income inequality including racial disparities in employment and access to capital, in areas of health care, criminal justice and police reform, we will not stand by and watch a change in the presidency and the makeup of Congress” destroy gains made by President Obama, he said. “We will act to protect the gains and to keep moving forward,” he said.

Rev. Sharpton was surrounded at the news conference by a host of faith and civil rights leaders.

He said the march will go from the Washington Monument to the Dr. Martin Luther King Jr. Memorial, where an agenda will be outlined on the theme: “We will not be moved.”

During a post-election phone conference in late November with journalists and civil rights leaders, Rev. Sharpton first mentioned the march, noting that the National Action Network hosted a conference call with 413 ministers planning the march.

“Some things you can’t vote out with an election. And some things will not change because a president has changed,” he said at the time.

Participating with Rev. Sharpton on the conference call with media were heads of six other organizations that represent the nation’s largest civil rights groups — Marc H. Morial of the National Urban League, Melanie Campbell of the National Coalition on Black Civic Participation, Wade Henderson of the Leadership Conference on Civil Rights, Cornell William Brooks of the national NAACP, Sherrilyn Ifill of the NAACP Legal Defense Fund and Kristin Clark of the Lawyers Committee for Civil Rights Under Law.

“We are not being alarmists. We are being realists about the record of the president-elect and what he has said. If people are saying we’re not giving him a chance, we are willing to give him a chance. The problem is we are listening to what he has said,” Rev. Sharpton said.

Mr. Morial said the group will maintain its posture of readiness to deal with issues and adverse appointments as they come from President-elect Trump.

“We are unified today and prepared to move forward. And we do this today in the spirit of understanding that this close election certainly yielded a new president-elect,” Mr. Morial said, noting, however, that Mr. Trump did not win a majority of the popular vote, nor did he win a mandate to act against civil rights.

Mr. Brooks said the NAACP is ready to employ every legal strategy necessary to fight against attacks. He noted how racism, anti-Semitism, xenophobia and misogyny became routine during the presidential campaign.

“When we look at the positions Mr. Trump took as a candidate, there is nothing to suggest that he is not fully committed to those positions as president,” Mr. Brooks said. “And his appointments indicate that he is doubling down on his campaign promises.”

Mr. Morial declined to say whether the civil rights groups, which met several times with President Obama, would seek a meeting with Mr. Trump once he takes office. Mr. Brooks listed grassroots mobilization, legislative advocacy as well as legal redress as among the strategies that could be used to fight against attempts to roll back civil rights. “And I think we can certainly expect the nation’s leading civil rights organizations to move in a concerted, coordinated and united fashion,” he said.

Ms. Ifill said much of their action will be contingent upon the actions of President-elect Trump.

“The ball is in Mr. Trump’s court and our job is to develop our strategy and to deal with what is likely to come to ensure that we are not only protecting civil rights but finding ways, even in this hostile climate, to advance civil rights,” she said.

Mr. Henderson and Ms. Clark made note of attacks that are already in full force against voting rights.

Ms. Clark said voter suppression efforts “put in place in the three years preceding the 2016 presidential election” by the Shelby County v. Holder case, “opened up the flood gates.” The decision by the U.S. Supreme Court in that case gutted the pre-clearance provision of the federal Voting Rights Act, which required mostly Southern states to get approval from the Justice Department before making any changes in voting policies.

She noted that African-American, Latino and other voters were blocked from casting ballots at certain polls during the Nov. 8 election. She described depressed voter turnout and voter suppression in Wisconsin, Pennsylvania, Florida and North Carolina. “Voter suppression had an impact on Election Day,” she said.

Mr. Henderson pointed out that states previously required to submit to pre-clearance under the Voting Rights Act “closed at least 868 polling places” since the Shelby decision in 2013.

Ms. Campbell also stressed the importance for the groups to hold public conversations about how and why certain coalitions supported Mr. Trump, including 52 percent of white women.

“Conversations must be had about what happened and about the issues that face us moving forward,” she said. “This generation is saying something went wrong and resistance is very much a part of the strategy.”

Rev. Sharpton concluded, “In terms of his movement to the right and the flavor of white nationalism, we may have lost an election, but we have not lost our minds nor have we lost our ability to mobilize … We are going to keep street heat up.”