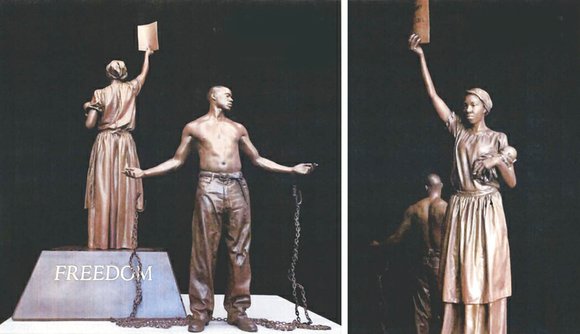 Plans for a Richmond monument that pays tribute to the Emancipation Proclamation and enslaved Africans are moving forward three years after it was first proposed, according to a state commission that is spearheading the effort.

The Dr. Martin Luther King Jr. Memorial Commission has tentatively selected the sculptor and a potential design for the Emancipation Proclamation and Freedom Monument.

The commission’s chair, Richmond Delegate Jennifer L. McClellan, told the Free Press that the commission is in negotiations with Thomas Jay Warren of Denver to create the sculpture that is to be placed on Brown’s Island, the city’s playground on the James River. 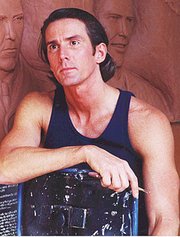 Delegate McClellan also provided a photo of the model that Mr. Warren delivered to the commission in competing for the work. The commission found his proposal to be the best fit with the concept.

The concept first was outlined in 2013, when former Richmond state Sen. Henry L. Marsh III led the commission. That was the same year Virginia and the nation marked the 150th anniversary of President Lincoln’s executive order freeing slaves in rebellious, slavery-defending Confederate states.

In its request for sculpture proposals, the commission stated that it sought to commemorate “the Emancipation Proclamation by erecting a monument … as a permanent reminder of the many enslaved Africans who did not witness freedom.

“It is the commission’s hope that the monument will spark inquiry about slavery, emancipation and freedom and inspire future generations to work … advance Dr. King’s dream of the ‘Beloved Community,’ a place where human dignity and the work of each individual is affirmed and recognized and where peace, justice, equality and love prevail.”

Delegate McClellan said elements still need to be agreed upon between the commission and Mr. Warren before a contract is awarded.

Before the work can be done, she said the commission would need to raise the money. She estimated the cost around $1.2 million for the monument.

Delegate McClellan said the goal is to have the monument in place by 2019 when ceremonies and programs will be held to mark the 400th anniversary of the arrival of the first Africans in the fledgling Virginia colony in 1619.