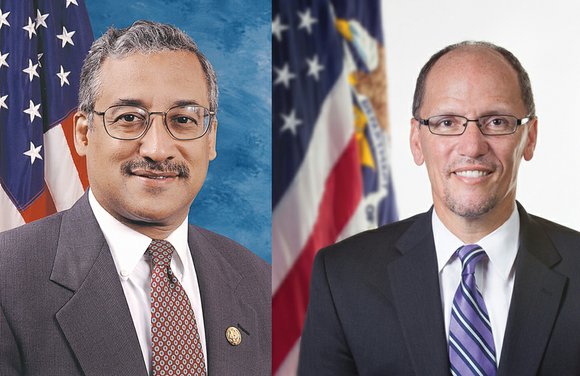 Today, full-time work year-round at the federal minimum wage of $7.25 an hour leaves an adult with two children earning thousands of dollars below the poverty threshold. That is unacceptable. No one who works full time should live in poverty. But the Republican-controlled Congress has refused to even consider legislation to raise the minimum wage.

You may think that when a majority of Congress and the president are from different political parties they could never work together to raise the minimum wage. But you would be wrong.

Congress raised the minimum wage in 2007, when Democrats controlled Congress and President George W. Bush, a Republican, signed it into law. The Fair Minimum Wage Act took us from $5.15 to $7.25.

You also may think that it’s a foregone conclusion that a Republican-controlled Congress and a Democratic president would never work together to raise wages, especially in an election year. But you would be wrong.

Twenty years ago, then-House Speaker Newt Gingrich and a Republican-controlled Congress passed an increase in the minimum wage from $4.25 to $5.15. The legislation was approved with significant bipartisan support; 160 House Republicans and 31 Republican senators — including the current Senate Majority Leader Mitch McConnell — voted in favor of it. President Bill Clinton, a Democrat, signed it into law. All of this happened in the middle of a presidential election. What happened in 1996 can and should be replicated in 2016.

Many of the arguments made back then by our House and Senate colleagues in support of raising the minimum wage are relevant today.

The real value of the federal minimum wage has eroded significantly, declining nearly 25 percent since 1968, when the purchasing power of the minimum wage was at its highest.

More than 600 economists, including seven Nobel Prize winners, affirmed that increases in the minimum wage have had little or no negative effect on the employment of minimum wage workers. In fact, a minimum wage increase could help stimulate the economy as low-wage workers would have additional earnings to spend.

People across the political spectrum support an increase in the minimum wage. A survey conducted by conservative pollster Frank Luntz showed that 80 percent of business executives in local chambers of commerce support increasing the minimum wage.

Yes, raising the minimum wage is a responsible policy that’s supported by research and demanded by the American public. But it’s also the right thing to do. Each day, minimum wage workers across the country struggle to make ends meet and provide a decent life for their children. It’s unconscionable that if you add up the salaries of all 1.1 million full-time workers who earn  $7.25 an hour or less, it’s still $9 billion short of what Wall Street bankers earned in bonuses alone last year.

It is always the right time to do the right thing, and now is the moment for Congress to work together on a bipartisan basis to raise the minimum wage.

We should raise the minimum wage again in 2016.

Rep. Scott, the ranking Democrat on the House Committee on Education and the Workforce, represents Virginia’s 3rd Congressional District. Mr. Perez is the U.S. secretary of labor.