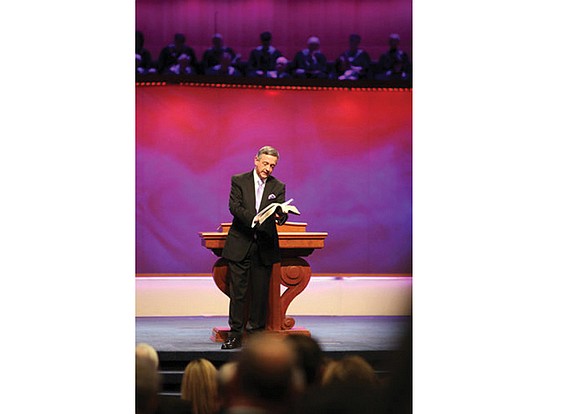 Anyone who knows the Bible shouldn’t take issue with the idea that God has given President Trump authority to take out North Korea’s dictator, said Pastor Robert Jeffress, the Dallas megachurch leader who drew sharp rebukes for stating just that.

Pastor. Jeffress’ words made headlines around the world. Some Christians and non-Christians accused him of exacerbating an already alarming war of words between President Trump and Kim Jong-un, the temperamental young leader of nuclear-armed North Korea.

His statement came after President Trump warned that North Korea would “be met with fire and fury like the world has never seen” if its leader kept threatening the United States.

The critics have overreacted, said Pastor Jeffress, lead pastor of First Baptist Dallas, whose public observances on current events have made him a target for criticism in the past. A public pastor with the president’s ear, Pastor Jeffress, 61, does not shy away from sharing his belief that Scripture should undergird politics and diplomacy.

“What I said was that the Bible has given government the authority to use whatever force necessary, including assassination or war, to topple an evil dictator like Kim Jong-un,” said Pastor Jeffress, elaborating on an Aug. 8 statement in which he said that God has given President Trump “authority to take out Kim Jong-un.”

“That authority comes from Romans 13. Paul said that government has been established by God to be an avenger of those who practice evil,” Pastor Jeffress said in an interview. “I made it very clear that Romans 12 says we are to forgive one another when people offend us — don’t repay evil for evil, but overcome evil with good.

“But in Romans 13, Paul isn’t talking about individual Christians. He’s talking about government. Government is an organization God uses to bring vengeance against those who practice evil.”

But many thought it came too close.

Dallas Morning News columnist Robert Wilonsky questioned “how a man whose calling is supposed to be that of peace could so fervently proselytize in favor of war.”

In a National Review piece, Mark Tooley, president of the Institute on Religion and Democracy, criticized Pastor Jeffress’ “bellicosity.”

And Christianity Today editor in chief Mark Galli penned an editorial titled “The Use of Nuclear Weapons is Inherently Evil.” After naming Pastor Jeffress, Mr. Galli wrote: “One would hope that Christian supporters of the president’s views would at least qualify and nuance their statements.”

North Korea did not come up in Pastor Jeffress’ public comments last Sunday at First Baptist, a Southern Baptist megachurch that claims 13,000 members and occupies six city blocks on a $135 million campus at the heart of downtown Dallas.

The pastor — whose sermon focused on Jesus’ last supper with his disciples in Luke 22 — said he felt compelled to address the fatal, violent clashes between white supremacist groups and counterprotesters on Aug. 12 in Charlottesville, Va.