Trump’s first year in office marked by controversy and protests 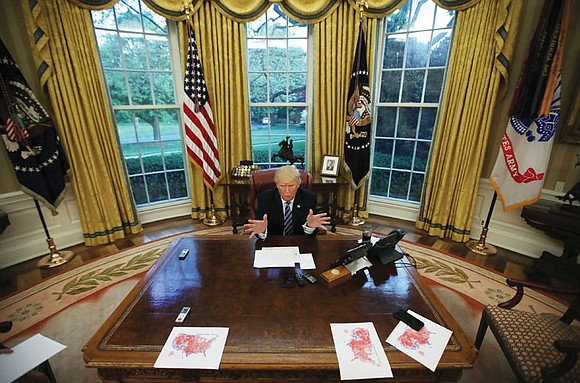 President Trump speaks during an Oval Office interview with Reuters in late April. He had printed maps of the United States showing areas of red where he won during the November 2016 presidential election.

At home, President Trump has struggled to enact sweeping changes he promised on the campaign trail.

He threatened to withdraw the United States from the North American Free Trade Agreement, or NAFTA, but business lobbyists persuaded him to renegotiate it. He signed an executive order setting up talks on the trilateral trade deal, which has hit roadblocks with Mexico and Canada.

His team also failed to repeal the Affordable Care Act, known as Obamacare, despite Republican control of the White House and Congress.

It was not until December that President Trump had his first legislative victory as both chambers of Congress passed a sweeping tax overhaul that permanently cuts federal taxes for businesses and corporations, while giving temporary cuts to individuals. Hundreds of people protested the tax bill from the public gallery in the U.S. Capitol and outside the offices of several members of Congress.