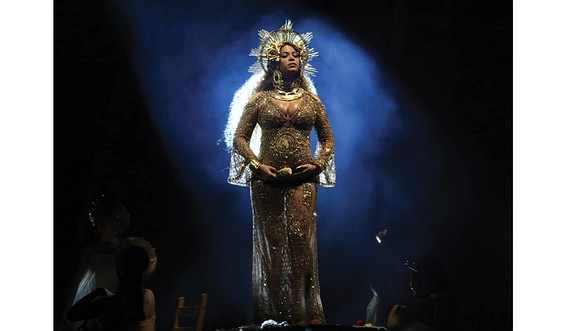 Beyoncé wows with her performance at the awards show, where she won two Grammys. Below, Chance the Rapper exuberantly accepts the Grammy for Best New Artist, one of two he won. Photos by Matt Sayles/Invision/Associated Press

Singer-songwriter Adele flubbed on a tribute Sunday night to the late George Michael at the 59th Grammy Music Awards, but she still walked away as the belle of the televised awards program.

She beat Beyoncé in the top three categories with her latest album “25,” repeating her accomplishments from 2012 when the British star also won all three awards.

In accepting, Adele used her speech to honor Beyoncé and her groundbreaking “Lemonade” album, which also was nominated.

She did fine on her opening number, “Hello,” but she stopped and had to restart her rendition of Mr. Michael’s 1996 classic “Fastlove,” because of technical difficulties. She brought off the song the second time around to a standing ovation.

Until Adele’s abrupt restart, Beyoncé was the talk of the show, which became a showcase for everything from religious imagery and thanks to God to political commentary on President Trump’s travel ban on Muslims, deportation of immigrants and resistance.

In her lengthy performance of two songs from her critically acclaimed album “Lemonade,” special effects made it appear she had many arms, mimicking Kali, a Hindu goddess who has been worshipped as the Divine Mother and the Mother of the Universe.

Observers on social media also made references to Venus, the Roman goddess of love and beauty; Mami Wata or Yemoja, the Yoruba patron deity of women, especially pregnant women; and the Virgin Mary, including the Virgin of Guadalupe in Catholicism.

Her mother and former stylist Tina Knowles introduced her: “Ladies and gentlemen, with my mother’s pride, my daughter, Beyoncé.”

She sang “Love Drought” and, later, “Sandcastles,” to loud applause from the audience, including daughter Blue Ivy and husband, Jay Z.

“My intention for the film and album is to create a body of work that would give voice to our pain, our struggles, our doubts and our history, to confront issues that make us uncomfortable,” Queen Bey said.

“It’s important to me to show images to my children that reflect their beauty, so they can grow in a world, where they look in the mirror, first with their own families as well as in the Super Bowl, the Olympics, the White House and the Grammys and see themselves,” she said, reading from a card.

“This is something that I want for every child of every race, and I feel that it’s vital that we learn from the past and recognize our tendencies to repeat our mistakes,” she said.