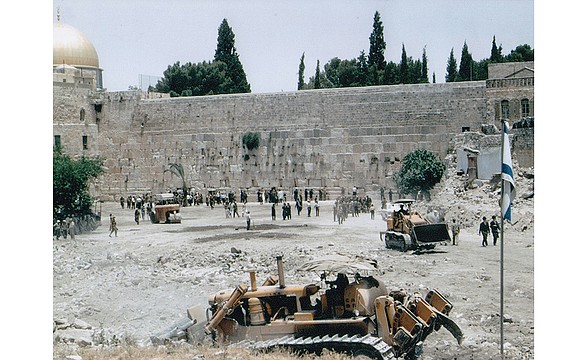 Several days after entering the Old City of Jerusalem in the Six-Day War in 1967, Israel cleared the most sacred Jewish place, the Western Wall of the Temple. Photo courtesy of Creative Commons

Ron Kronish was an American college student when Israel defeated the Egyptian, Syrian and Jordanian armies during the 1967 Six-Day War.

That war, whose 50th anniversary was marked on Monday, had a profound effect on many Israeli and Diaspora Jews that is felt till this day.

Jews — as well as many Christians — viewed Israel’s capture of East Jerusalem and the West Bank from Jordan as a kind of miracle. Israel had beaten three much larger countries and, for the first time in 2,000 years, Jewish holy sites were in Jewish hands.

But the war, which also saw the capture of the Golan Heights, Gaza and the Sinai, displaced up to 325,000 Palestinians. (There are now an estimated 2.5 million refugees and their descendants living in the West Bank; Israel has relinquished the Sinai and the Gaza Strip.) 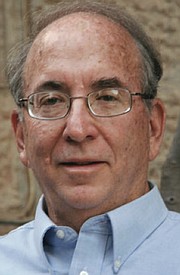 For Rabbi Kronish, now 70 and a Reform rabbi dedicated to interreligious peace building, Israel’s lightning victory over its hostile neighbors “was life-changing. It made our Jewish identity very Israel-centric.”

Until then, Rabbi Kronish said, young American Jewish activists were largely preoccupied with the Vietnam War and the Civil Rights Movement.

“I was caught up in the victory, I felt that history was happening and I wanted to be part of it,” said Rabbi Kronish. As it did for tens of thousands of other North Americans, the war spurred him to move to Israel, albeit several years later.

The war, which reunited the eastern and western parts of Jerusalem, also inspired Jews being persecuted in what was then the Soviet Union to fight for the right to emigrate and freely practice their religion.

“When the soldiers of the Israel Defense Forces broke through the gates of Jerusalem’s Old City, they also punched a hole in the Iron Curtain, inspiring us Soviet Jews to start our struggle for freedom,” recalled Natan Sharansky, a former Soviet refusenik and current chairman of the Jewish Agency for Israel.

“This struggle, supported by Jews around the world, ultimately brought down the Iron Curtain and enabled a million (Soviet) Jews to come home to Israel,” Mr. Sharansky said.

Sara Yael Hirschhorn, whose new book “City on a Hilltop” explores why thousands of North American Jews decided to settle in the West Bank in the aftermath of the Six-Day War, said the war was “a watershed moment for American Jewry, emotionally, intellectually and spiritually.”

Dr. Hirschhorn said Jews in Israel and abroad watched in dread as Egyptian, Syrian and Jordanian troops amassed on Israel’s borders in May 1967 and viewed Israel’s victory as a “modern-day miracle, something that prevented a second Holocaust.”

The Americans who moved to the West Bank — she estimates that 15 percent of Jewish settlers are American citizens — viewed the captured territory “as the unconquered or newly conquered frontier, and they wanted to be pioneers. They felt that founding a settlement was taking an active role in their realization of Jewish and Zionist aspirations.”

Yossi Klein Halevi, a senior fellow at the Shalom Hartman Institute and author of “Like Dreamers,” which examines the divergent ideologies that have shaped Israel since the Six-Day War, said the war created two kinds of Israelis:

“There are the ones whose primal memory of May 1967 is the sense of existential fear, aloneness and the world’s abandonment. Then there are the June 1967 Israelis whose primary experience from the war was one of empowerment and who insist that Israel needs to take responsibility for the moral consequences of power.”

In practice, Mr. Halevi said, most Israelis have elements of both sensibilities, and the political debate over whether to relinquish the land Israel captured during the war “is often between which of these experiences is more powerful today.”

“Are we a people still existentially threatened or under siege or a people who know unprecedented power and face agonizing moral dilemmas” vis-à-vis the Palestinians? “My answer to both questions is yes,” he said.

What makes the debate so difficult is that Israel is still facing long-term threats from Iran, Hezbollah, Hamas and the Islamic State group, Mr. Halevi said, noting that “there are hundreds of thousands of rockets and missiles aimed at Israeli cities.”

On the other hand, the political “disintegration” of much of the Middle East “has ended any credible conventional threat to Israel, and growing numbers of Arab leaders are looking to Israel to defend the Sunni world against Iranian expansionism,” he said.

Yisrael Medad, an American-born settler activist and resident of the West Bank settlement of Shilo, believes there is no contradiction between living on land Israel captured in 1967 — most of which the Palestinians claim as their own — and Jewish moral values.

Shilo, Mr. Medad said, was a Jewish town in biblical times, “and if the Arabs refuse to make peace, refuse to negotiate, they are the ones who are immoral.”

The biblical land of Israel “is our homeland and it was the Arabs who, between 1920 and 1948, ethnically cleansed the Jews who lived in Jerusalem, Gush Etzion, Hebron and Gaza. People forget that chapter of history,” he said.

Decades after the Six-Day War, Rabbi Kronish, who lives in Jerusalem, raised his children there and is now mostly retired, said he was “naïve and enthusiastic” when he immigrated in 1979.

Which is not to say he regrets having moved to Israel.

“I feel generally positive about Israel. It’s my home. My disenchantment in recent years comes from the failure of the governments of Israel to seriously seek peace with our neighbors. I would be happy if the Palestinians were prepared to make similar painful compromises.”

Moving to Israel “has made it possible for me to contribute to peaceful relations between people of different faiths. I still believe peace is possible,” Rabbi Kronish said.