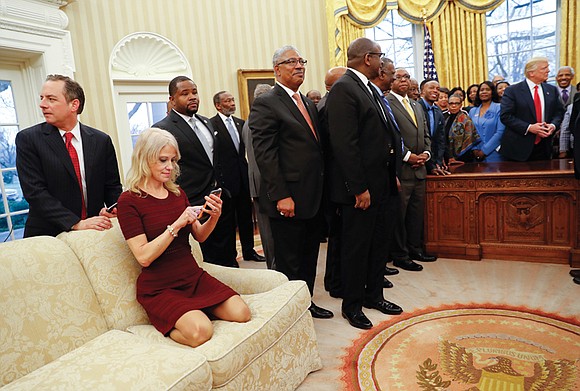 As President Trump meets Monday with presidents and chancellors of historically black colleges and universities, Kellyanne Conway, counselor to the president, sits shoeless on an Oval Office sofa working on her cellphone. The photo went viral. Pablo Martinez Monsivais/Associated Press

President Trump made historic and symbolic embraces of the nation’s historically black colleges and universities this week, welcoming university chiefs to the White House and issuing an executive order continuing the White House Initiative on HBCUs and moving its office to the White House to facilitate more direct contact with Trump senior staff.

Monday’s brief White House gathering was the first time a president officially greeted a group of HBCU presidents and chancellors. It was followed Tuesday by a smaller audience of HBCU chiefs invited to the White House to witness President Trump signing the executive order.

President Trump, in the executive order and in his address later Tuesday night to a joint session of Congress, stopped short of going beyond symbolic gestures, however, despite declaring HBCUs essential partners in the nation’s higher education network.

President Trump did not answer challenges from HBCU presidents to restore the “aspirational goals” started by former President Jimmy Carter and formalized by the late President Ronald Reagan requiring all federal agencies to award 5 percent of their contracts and grants annually to HBCUs.

Some of the HBCU presidents and higher education leaders had hoped President Trump would match or exceed that goal. His executive order, however, expressed only broad themes of inclusion.

The president also did not address directly the wish list of the education leaders that he use the occasion to signal that his forthcoming budget plans would boost student aid and assistance by increases in federal Pell Grants and restoration of Parent PLUS Loans, or PPL, to past levels. Such assistance is essential for HBCU students, more than 80 percent of whom rely upon financial aid to enter and complete college.

The two days of meetings and contacts on Capitol Hill and at the White House was nothing short of busy for the more than 80 HBCU leaders. What started as a “Fly-In” to help Republican House leaders was quickly embraced by the White House as a vehicle for establishing closer ties with HBCUs, a historical action base for African-American voters.

A highly touted “listening” meeting with Vice President Mike Pence and top administration executives Monday afternoon was more brief than many had expected, although well attended by senior White House aides. The meeting was interrupted when President Trump said he wanted to meet briefly with the HBCU presidents.

An unofficial photo from that meeting went viral worldwide. In it, Kellyanne Conway, counselor to the president, was perched shoeless on an Oval Office sofa with her cellphone as President Trump posed for photos with the university presidents. The distraction got as much attention on social media as the actual meeting.

As the HBCU presidents gathered Monday evening for a reception, the event was rattled by a statement issued by Ms. DeVos that offended some participants.

Ms. DeVos is a major supporter of charter schools and has never worked in a public school setting or with HBCUs. In her statement, she cited HBCUs as “real pioneers when it comes to school choice.”