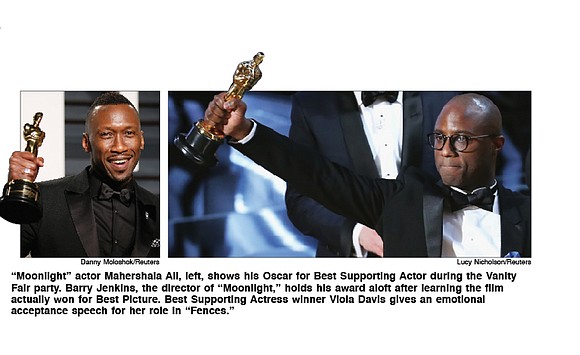 The awards for supporting roles both went to African-American actors. In addition to Mr. Ali in “Moonlight,” Viola Davis won Best Supporting Actress for her role as Rose in the film adaptation of August Wilson’s play “Fences.” It was directed by Denzel Washington, who also played the starring role of Troy Maxson.

“I became an artist, and thank God I did, because we are the only profession that celebrates what it means to live a life,” Ms. Davis said in her tearful acceptance speech.

“So here’s to August Wilson who exhumed and exalted the ordinary people.”

One of the evening’s highlights was the cast of “Hidden Figures,” whose starring actors Taraji P. Henson, Octavia Spencer and Ms. Monáe presented the award for Best Documentary. When the trio came to the stage, they announced a surprise guest to help them — 98-year-old Katherine Johnson of Newport News, the brilliant NASA mathematician whose calculations charted the course for America’s space flights from the first man to orbit the Earth to the moon landing.

Ms. Henson portrayed Mrs. Johnson in the film, which was nominated for three awards, including Best Picture.

The Best Documentary award went to “O.J.: Made in America,” about O.J. Simpson’s life, produced by ESPN Films as part of their “30 for 30” series.

Other significant awards included Best Actor and Actress, awarded to Casey Affleck for “Manchester by the Sea” and Emma Stone for “La La Land,” respectively, and Best Director to Damien Chazelle for “La La Land.”