UR dean, former Va. first lady named to state Board of Education 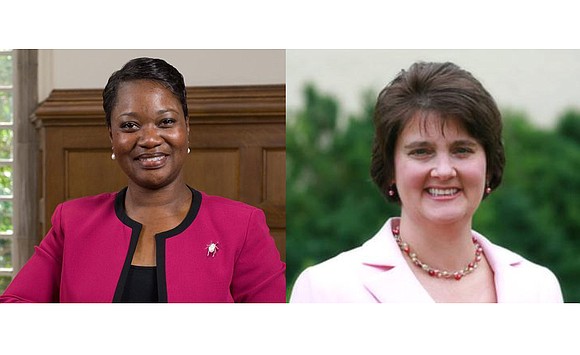 Dr. Jamelle S. Wilson, dean of the University of Richmond School of Professional and Continuing Studies, and Anne Holton, former state secretary of education, were recently appointed by Gov. Terry McAuliffe to the Virginia Board of Education.

A native of Spotsylvania, Dr. Wilson was the first in her family to attend a four-year university. She earned a bachelor’s degree in English from the University of Virginia, where she also earned a master’s in teaching from the Curry School of Education and a doctorate in education in 2002.

She also earned a master’s degree in English from Virginia Commonwealth University.

In 2015, she was honored among the Strong Men & Women in Virginia History by Dominion and the Library of Virginia.

“As a product of Virginia’s public schools, I am keenly aware of the power of education to make a difference in the life of a child — to change one’s life course,” Dr. Wilson said in a statement to the Free Press.

“We know that quality education is a key attribute of healthy families, resilient communities and a vibrant, productive society.”

Ms. Holton, a former Virginia first lady, is the wife of U.S. Sen. Tim Kaine. She attended Richmond Public Schools when her father, A. Linwood Holton, served as Virginia’s governor in the early 1970s.

She earned a bachelor’s from Princeton University and a law degree from Harvard Law School. She served as a judge on the Richmond Juvenile and Domestic Relations District Court and stepped down in 2016 when Gov. McAuliffe named her state secretary of education.