‘We all fail. The key is what you do that next day,’ Gov. McAuliffe tells VUU grads 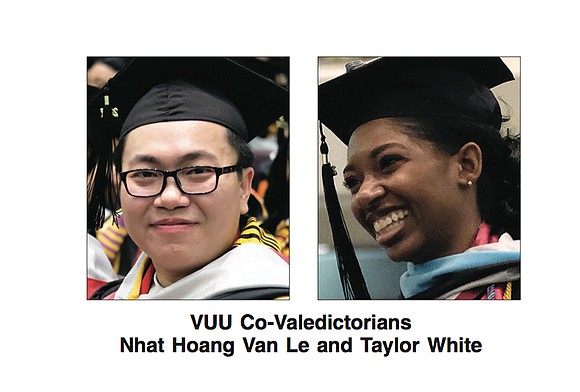 Gov. Terry McAuliffe stressed the importance of taking chances and embracing setbacks as he addressed Virginia Union University’s Class of 2017 during commencement on Saturday.

He said his own path to entrepreneurship and his loss of the Democratic gubernatorial nomination in 2009 were not easy.

Marquis Johnson of Newport News is elated to get his degree in mass communications from Virginia Union University during Saturday’s ceremony at St. Paul’s Baptist Church in Henrico.

“You’re going to fail. We all fail. The key is what you do that next day,” the governor said.

“I got crushed 2-1” in that initial primary election, he said. “It was a painful experience.

Commencement for the 152-year-old historically African-American institution was moved because of the threat of foul weather from Hovey Field on campus to St. Paul’s Baptist Church in Henrico County. The university awarded 177 undergraduate degees, 133 master’s degrees and 13 doctorates during the ceremony.

Gov. McAuliffe offered remarks in his usual lively, high-energy style before receiving an honorary degree and then dashing off to Wake Forest University in North Carolina for the commencement of his daughter.

He described for the audience the national political climate in 2013, around the time that many students from the graduating class arrived and enrolled at VUU.

“We had just re-elected America’s first black president. ISIS was not yet a household name, and for some people, for some reason, they thought Macklemore was actually a good rapper,” he said, laughing with the crowd.

“Today we find ourselves in a world where saying ‘Black Lives Matter’ is somehow a political statement and where a president of the United States just this week questioned the value and constitutionality of HBCUs,” he said, referring to a statement accompanying the May 5 appropriations act signed by President Trump to keep the federal government operating through Sept. 30.

In the statement, the White House announced that it would treat a program that helps HBCUs obtain low-cost construction loans “in a manner consistent with the (constitutional) requirement to afford equal protection of laws.”

The VUU audience groaned in disapproval at Gov. McAuliffe’s mention of it.

“I’d be lying if I sugarcoated the world you are about to inherit,” the governor told the graduates. “Like generations past, you will be charged with doing everything in your power to make it a better world. The good news is, Virginia Union University has prepared you to rise to that challenge.”

He also acknowledged three high-achieving students during his remarks.

He praised Dominique Vaultz, a mass communications major from New York, for her achievement as a first-generation college student, and announced her acceptance to Emory University’s Law School.

He also hailed VUU’s co-valedictorians, Nhat Hoang Van Le of Vietnam and Taylor Lauren White of Maryland, who both had 4.0 GPAs.

In his own address to the graduating class, Mr. Le thanked the university for its support as he became VUU’s first graduate with a triple major of chemistry, mathematics and physics.

Remarking on the emotions connected with moving on from college, Gov. McAuliffe said he also found the occasion equally festive and bittersweet.

“As governor, I have given many commencement addresses,” he said. “This will be the last address as governor, so I clearly saved the best for last,” he said to cheers.

Also receiving honorary degrees were the Rev. Yvonne J. Bibbs, the first female pastor in the 94-year history of Sixth Baptist Church in Richmond, in recognition of her “outstanding humanitarian efforts” in Richmond and in the state; VUU benefactors James E. and Barbara B. Sellman, who have donated more than 300 pieces of art to the university’s Museum Galleries from their worldwide travels and art collecting; and Dianne Watkins Walker, who spearheaded the effort to restore a carillon in the university’s historic Belgian Building through the nonprofit she founded, Bells for Peace, and to repair the building’s exterior and light the tower.

Former VUU President Claude G. Perkins also was granted the title of president emeritus by the VUU Board of Trustees.