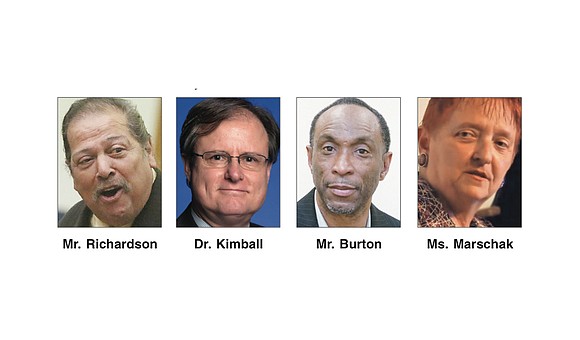 At a raw and emotional meeting last week with members of the Monument Avenue Commission, several speakers told commission members there is no middle ground — the Confederate statues cannot remain on Monument Avenue if the city wants to evolve beyond its racist past.

“People took up arms against the United States of America with the aim of killing the Union and separating into another country,” said Richmond native Gary Flowers, a former national field director with the Rainbow PUSH Coalition and current host of a local radio talk show.

He argued that the Confederate figures will be “a global embarrassment” as Virginia prepares for next year’s commemoration of the 400th anniversary of the arrival of the first Africans in 1619.

“Those statues stand for men who fought to make sure that young women continued to be raped,” said former Richmond City Councilman H.W. “Chuck” Richardson. “Those men up there now that we praise … fought for white supremacy and believed in those activities.”

He said the commission members have a “moral obligation” that usurps any hidden political aspirations they might hold to recommend the statues be removed.

“To allow those symbols to remain is to allow good people who know better to be a part of the big lie,” said former Richmond City Councilman Martin E. “Marty” Jewell.

The meeting, held March 29 at Fifth Baptist Church on West Cary Street, was hosted by the Sacred Ground Historical Reclamation Project, a group that has advocated for Confederate monument removal for more than a decade. The group has worked for the preservation of the African Burial Ground on the edge of Shockoe Bottom.

About 30 people attended. It was the fourth in a series of small, community group meetings attended by Monument Avenue Commission members.

Previous community meetings were held by the Richmond Peace Education Center, the Sons of Confederate Veterans and First Unitarian Universalist Church of Richmond to gauge public sentiment about what do to with the city’s public statues dedicated to Confederates.

Initially, Mayor Levar M. Stoney established the commission to determine the best way to add “context” to the statues. He later added removal as an option following the violent and deadly rally by neo-Nazis and white supremacists in Charlottesville last August in support of maintaining that city’s Confederate statues in public parks.

State law bars alteration or removal of war monuments, but because of a pending lawsuit in Charlottesville, it is unclear whether the Confederate statues on Richmond’s Monument Avenue would fall into that protected category. If they do, Richmond City Council would need to request General Assembly permission to remove them, a measure the council rejected on a 6-2 vote in December. Several council members said at the time that they were awaiting the Monument Avenue Commission’s recommendation.