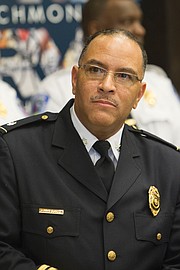 Richmond Police Chief Alfred Durham said he has sought to hold his department to high standards and to impose discipline when he finds officers fail to uphold them.

Since taking command of the 750-member force in February 2015, Chief Durham has fired, forced the resignation of or terminated 19 officers for serious infractions, including five officers this year.

Those actions, he said, “I do not take lightly.”

He said the number doesn’t include dozens of other police officers who quietly have been suspended, received reprimands or been required to undergo counseling or take refresher training for breaking departmental rules and regulations.

In separate data, the department reported that 22 officers served suspensions in 2017 alone.

During a meeting with two reporters last Friday, Chief Durham said he believes in holding department members “accountable” for operating with integrity given the authority with which they have been vested and the need to maintain public trust.

And he noted that he has gone far beyond most departments in transparency.

Under an agreement reached last year with groups including the Legal Aid Justice Center, the department regularly posts updated statistics online that show the number of complaints filed and the results of internal investigations.

That’s why Chief Durham expressed frustration at seeing residents use Facebook to spread information about police that cannot stand up to scrutiny.

He cited the case of Duron L. Chavis as a prime example.

In the meeting, Chief Durham showed police dashboard and body-worn camera footage that dispute Mr. Chavis’ claims in a Facebook post and in a Free Press report that he was subjected to a traffic stop Aug. 2 solely because an officer alleged he “smelled marijuana.”

The Free Press included Mr. Chavis’ claim in an article published in the Aug. 9-11 edition about police employing questionable claims of smelling marijuana to conduct warrantless searches of people, cars and possibly homes.

The department offered a “no comment” response when asked about Mr. Chavis’ claim for the article.

Mr. Chavis, who works for Lewis Ginter Botanical Garden and is well known for his community activism and his work in promoting healthy eating and gardening, stated in a Facebook post that the officer told him “that he pulled me cuz he smelled marijuana. From his car. With his windows up. While both cars were in motion.”

During a Free Press interview for the article, Mr. Chavis said the “smell of marijuana” was the only justification given by police for the stop and that he was not asked about other traffic violations. Mr. Chavis also said police let him go after he told them he did not use marijuana nor did he have it in the car.

Mr. Chavis did not mention in the interview or on Facebook that this was at least the fourth time this year that he has been stopped by police for driving a vehicle with an invalid inspection sticker or expired registration decals, according to court records, or that a police record check during the stop showed his driver’s license had been suspended, possibly since March.