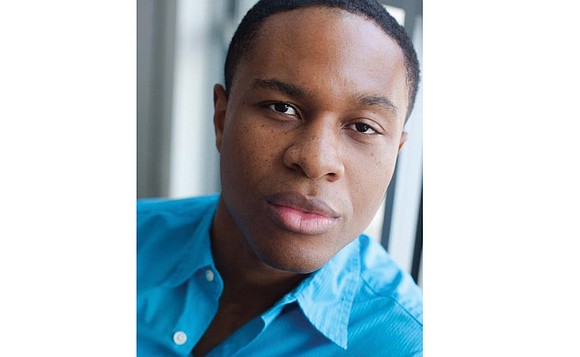 “We can learn from our ancestors that it is possible to blaze our trail in order to improve the lives of our descendants because they will be a direct reflection of what we accomplish in our lives.”

This is the observation of Jamar Jones, a 26-year-old Richmond native starring in The Heritage Ensemble Theatre’s latest production, “Free Man of Color,” written by Charles Smith.

It is one of the tributes taking place during February to mark Black History Month.

The play is an adaptation of the story of John Newton Templeton, a slave who was unexpectedly freed and attends Ohio University, graduating in 1828, well before the end of slavery.

The school’s president, the Rev. Robert Wilson, brings Mr. Templeton to the school, where he is the first person of color to enroll. An abolitionist, Rev. Wilson believes that Mr. Templeton has a divine calling to lead free black people in a free and sovereign nation of their own — Liberia.

Mr. Templeton, who is caught between the expectations of Rev. Wilson and realizing what founding a colony of free black people in Africa would mean to American black people, learns what it really means to be a free man of color.

“You have a free black man going to a university in the 19th century when most blacks are still in bondage,” Mr. Jones explains. “This has its own challenges.

“Throughout the performance, you see Mr. Templeton coming into full manhood and full personhood as he discovers his role in society as a free black man at that time.

“I hope people come along on this journey with an open mind and are ready to examine what was reality for black people of the past and, hopefully, see how many made sacrifices for us all,” he says.

The Heritage Ensemble Theatre focuses its productions on the African-American experience. Mr. Jones has been with the company since last February, when he was cast in “Choir Boy,” a play by Tarell Alvin McCraney about a gay black teen at a private boarding school.

Mr. Jones works as an interpreter at Colonial Williamsburg, where he portrays free and enslaved black people from the 17th and 18th centuries. During the evenings, he performs in theatrical productions around the area and travels to museums and many unconventional settings performing living history.

“I bring to life the people and their stories, which were part of the beginnings of this country,” Mr. Jones says.

February is special, he says, because it is important to understand and celebrate “our collective history, all of America.”

“We all have descended from different types of people — some were enslaved or were enslavers — but it is still our collective story,” Mr. Jones says. “Some of these stories have gone untouched, untold and unrecognized.”

It’s important for these stories to be told, he says, because enslaved black people were considered only as property. “The information we have on people in bondage is just in wills, with a price next to them,” Mr. Jones says. “Their humanity was taken away from them.

“By highlighting these stories, identifying who these people really are, we are paying homage to their lives because they did not get their credit when they were alive. They were trailblazers making a difference.”

Audiences have varying reactions to his characters, Mr. Jones says. “Some people are thrilled to hear these stories because they know their personal history and they want the ancestors to be celebrated.

“Black History Month and portraying our history helps us to have these difficult conversations.”

Meet this portrayer of black history and this week’s Personality, Jamar Jones:

Date and place of birth: March 15 in Richmond.

Family: A fun and lovely one, based predominantly in Virginia and North Carolina.

I started acting: In the 10th grade. My very first play was “The Diviners,” playing the role of Melvin Wilder.

When and why I got involved in theater: I always wanted to be on stage since I was a kid, but was too self-conscious. Thankfully, my very first drama teacher, Charmaine Crowell-White, told me that she was going to put me in a play. And here we are 10 years later!

My most satisfying acting role: Every character has brought satisfaction or taught me something new.

My latest role: John Newton Templeton in The Heritage Ensemble Theatre’s production of “Free Man of Color” by Charles Smith.

How I prepared for this role: I researched John Newton Templeton and examined what was going on in America during his time at Ohio University. Then I began to explore in order to craft my interpretation of this man.

Actor who influenced me the most: It’s a three-way tie — James Earl Jones, Morgan Freeman and Whoopi Goldberg.

Why African-American theater really interests me: I love telling stories. As a black man, it’s very special to examine and highlight the black experience on stage. There is such a rich history and theater is a great medium to share this history.

A perfect day for me: Waking up with good health, spending time with those I love, experience some form of art and plenty of laughter. That’s cool with me.

Something I love to do that most people would never imagine: I love taking myself on sushi dates!

A quote that I am inspired by: “If you want to be somebody, if you want to go somewhere, then you better wake up and pay attention.” — Whoopi Goldberg as Sister Mary Clarence in “Sister Act 2.” My mom and I are big Whoopi fans!

How I unwind: Dancing to any of Janet Jackson’s music.

Outlook at start of day: Make it count. Today will only come once.

The best thing my parents ever taught me: That I should never limit myself — any and everything is possible.

The person who influenced me the most: I am blessed to have a fantastic community. An incredible mother, awesome father and great family and true friends. I learn from them all.

What I’m reading now: “The Hollywood Commandments: A Spiritual Guide to Secular Success” by DeVon Franklin and Tim Vandehey.

My next goal: Preparing for new projects and more reading and writing in order to continue to enhance my artistic development.