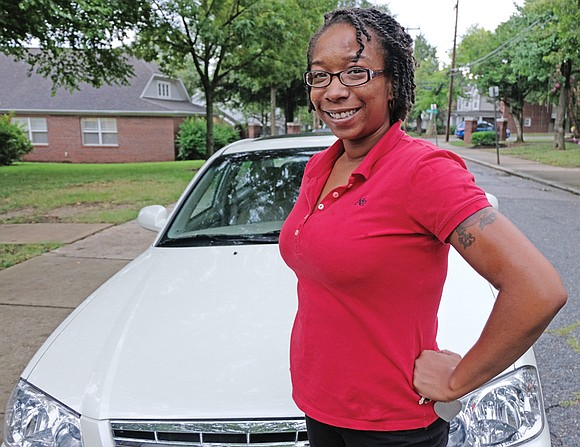 Kiocia Wilkerson of South Side is happy and proud about the 2002 Kia Optima that was presented to her by David L. Williams Jr. and the DLW Veterans Outreach and Training Center during the spring. Photo by Sandra Sellars Richmond Free Press

While living in Richmond’s Fairfield Court public housing community for nine years, Kiocia Wilkerson spent much of the time riding buses back and forth to work each day. She also relied on bus transportation to take her two children, one of whom is autistic, to and from school and to doctors’ appointments.

Although the 30-year-old single mother moved from Fairfield Court a year ago to what she considers a safer neighborhood on Richmond’s South Side, her multiple bus rides continued. Some days, Ms. Wilkerson missed the bus by just a few seconds if a bus driver “was having a bad day and would shut the door and drive away.”

All of that changed on April 25 after a local veterans group heard about Ms. Wilkerson’s plight. Impressed by her perseverance and efforts to care for her family, the DLW Veterans Outreach and Training Center presented Ms. Wilkerson with a 2002 Kia Optima.

BLISS, Building Lives to Independence & Self Sufficiency, helps families living in Richmond’s public housing communities realize their dream of becoming self-sufficient by building wealth, self-esteem and giving them hope, said Ms. Smith, who has known and worked with Ms. Wilkerson since 2015.

“This vehicle was awarded to Kiocia to help her get around town,” said Ms. Smith. “With the help of David Williams, DLW Veterans Outreach and some of his supporters, they saw a need in helping this young lady. So this became a special project for them by reaching outside of their veterans support mission to help someone they saw accomplishing things when the odds were against her.”

Mr. Williams agreed, saying that hearing about Ms. Wilkerson’s perseverance led him to launch a quiet campaign to help her with transportation.

“I marvel at people who continue to strive and do things for themselves,” Mr. Williams said. “It reminds me of my father who used to say, ‘It ain’t always gonna be that way.’ ”

Mr. Williams quickly went to work, securing the assistance of Paul Tumelaire who works at a veterans mobility center on Midlothian Turnpike. The center specializes in handicap-accessible vehicles and sometimes has vehicle giveaways, Mr. Williams said. Although no vehicles were available, Mr. Tumelaire promised Mr. Williams that he would look out for a vehicle suitable for Ms. Wilkerson’s needs.

Meanwhile, Mr. Williams reached out to donors willing to help purchase a car for Ms. Wilkerson. Six months later, he had $6,800 in donations from 15 people, enough to purchase the Kia Optima for $6,500.

Ms. Wilkerson is thrilled and thankful for the vehicle and her newfound independence.

“I have advantages and opportunities that I didn’t have as a bus rider,” Ms. Wilkerson said in a recent interview. “I am able to go grocery shopping, take or pick up my kids from school and it cuts down on travel time to work.

“Instead of having to supply money daily for the bus, I am now able to fill my (gas) tank and be good for the week or so with $50, which is what I spent on bus fare every two weeks.

“And if my kids need to go somewhere or visit the doctor immediately, I can take them without the hassle of signing up (72 hours ahead of time) for medical transportation.

“Yes, sometimes I have to remind myself that it’s really mine,” Ms. Wilkerson said as she stared at the car from her kitchen window.

The car, previously owned by a Richmond couple whose son used it in college, only had 40,000 miles on it. Ms. Wilkerson’s plans to purchase a car of her own never panned out.

“Something always came up every time I tried to save,” Ms. Wilkerson said. “It was hard to take steps. I already had my learner’s permit. Sandee told me to study for my road test and my sister’s boyfriend helped me learn. So I held onto my license for a year.”

She met Ms. Wilkerson after the young mother took a parenting class at a Richmond library. One of the librarians called Ms. Smith to say that she was sending Ms. Wilkerson to meet her.

“I think she will be a good fit for your program,” Ms. Smith recalled the librarian saying.

During their meeting, Ms. Smith said that Ms. Wilkerson barely made eye contact, and later admitted to being depressed mainly because her son, then 4, had autism, a developmental disorder with which she nor anyone around her was familiar.

After determining that Ms. Wilkerson qualified for the BLISS program, Ms. Smith directed her toward resources to help her son.

“We Googled some things and she connected to some support groups,” Ms. Smith said.

She faced the same childcare dilemma when working for a Kroger grocery store for nearly nine years. For now, her job in the cafeteria at Maymont Elementary School eliminates worries about childcare because the hours are more stable than when she worked at the grocery store.

“It’s not a career,” Ms. Wilkerson said about her job. “It’s a stepping stone. I had to find a job where I could work in the day while the kids are in school.”

Because NayŚean is autistic, Ms. Wilkerson is extra cautious about whom she allows to care for him. Her father, who died two years ago, was one of the few people she trusted with her children, she said.

Although she is close to her grandmother and a few other relatives, Ms. Wilkerson said her relationship with her mother is strained. And while her children’s father is in their life, he does not provide much financial support, she said.

Yet, Ms. Wilkerson appears pleased with her new life, one in which she no longer fears letting her children play outside.

“Financially, I couldn’t move on until I heard about these apartments through Sandee,” Ms. Wilkerson said about her home, which is located in a development where the Blackwell public housing community once stood. “I applied. Next thing you know, I left Fairfield Court. I wanted more for my kids.”