Pulse of the city 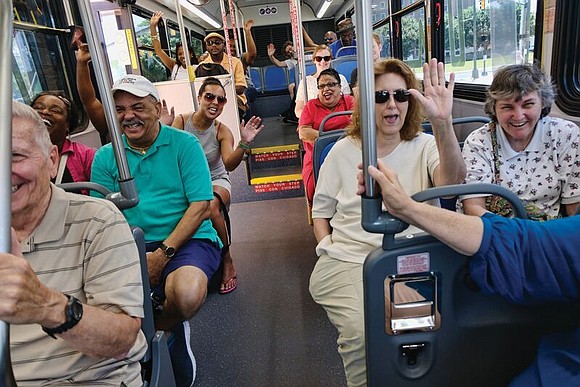 Mayor Levar M. Stoney calls it “progress” and “one of the most exciting and progressive public transportation projects in Richmond history.”

But patient care specialist Yveatrice Burno calls it “a huge inconvenience that has made it more difficult to get to work,” while retiree Kathy Hanes calls it “a big problem that forces me to walk more blocks on my bad knee to catch a bus.”

No matter how it is described, the new $65 million Pulse bus rapid transit line, and the huge overhaul in regular bus routes, are now a fact of life for the 20,000 city residents whose connection to jobs, doctors, grocery stores and the rest of Richmond revolve around public transportation.

The 7.6-mile, east-west Pulse service and bus route changes in Richmond and Henrico County launched Sunday, and GRTC has reported huge demand the first two days. Rides are free on every line through Saturday, June 30.

People like John and Mary Davis, who always take a car, spent part of Sunday trying out the system, a hopeful sign that Pulse could attract new riders.

“I told my husband we had heard so much about Pulse, we just had to see it in action,” Mrs. Davis said with a smile. “Not bad. I might leave my car and take this when I have to go Downtown.”

On Monday, Naomi Graves spent several hours riding the Pulse and connecting buses. “My boss told me to take the day off to make sure I knew how get to work,” the East End resident said.

The company reported more than 6,200 people packed the Pulse buses on opening day, with nearly 8,700 people using Pulse on Monday — far above conservative, pre-service projections of 3,500 riders a day.

GRTC expected to use six Pulse buses on opening day but added two more because so many people turned out to test the system. Riders swamped the stations, particularly those in Downtown, said GRTC spokeswoman Carrie Rose Pace.

It’s too early to tell whether such demand will continue, but there is some indication Pulse, which replaced the old Broad Street Route 6, will stay busy. The main reason is that the shuffle in bus routes means a majority of runs are no longer traveling along long stretches of Broad Street during most weekday hours and on Saturdays.

Some buses that once traveled Downtown, such as routes to the University of Richmond and to western Henrico County, now start and stop at Pulse’s station at the Shops at Willow Lawn.

The Route 50 bus, one of the few that runs along Broad Street, starts at the Science Museum of Virginia, requiring riders from the east to first catch the Pulse to transfer to that bus.

For buses running north and south and on a number of other routes, the familiar stop at the GRTC transfer area on 9th Street has been eliminated, except after dark and on Sundays and holidays.

Thousands of regular riders quickly learned that their knowledge of bus routes and stops was obsolete.

While GRTC promised the changes will result in faster, more direct service, regular rider Joseph Rogers said he’s giving up the bus to ride his bike from Church Hill to his job at a Downtown museum because the bus is now too slow.

Others are trying to adjust to the changes.

“A whole lot of people don’t know what bus to take because all the numbers have changed,” he said. “I’m sure they’ll get through this, but this has been harder than a lot of people thought it would be.”

Ms. Pace said GRTC tried to prepare riders with online information and community sessions during the past two years. However, the online information is not easy to navigate. A Free Press reporter tried and failed in seeking to pinpoint the location of bus stops using GRTC’s interactive online maps.

Ms. Pace said GRTC is encouraging riders to call customer service, but acknowledged the call center is overwhelmed at times by the volume.

Handyman Elliott Roman found navigating by bus “a mess. It’s just insanity what they are putting people through.”

He spoke out after encountering problems trying to get from his home near Battery Park in the North Side to Richmond Community Hospital in the East End to visit a friend.

“It took me two hours to get there,” he said. “In the past, and I ride the bus a lot, it would take less than an hour with a lot less stress.”

“I used to hop a bus near my home and transfer at the Downtown plaza on 9th Street near City Hall. This time, I had to catch a bus and then get the Pulse and then catch another bus.

“The real problem was catching the right bus. I asked the driver, and he couldn’t tell me. Drivers used to know the system, but he said all he knew was his route. That was really frustrating. I couldn’t get any answers. And I couldn’t find anyone to ask.”

There are no answers for Ms. Hanes, the retiree. She said she was stunned to see GRTC eliminated the stop on Ladies Mile Road near Hazelhurst Avenue at the entry to the Providence Park neighborhood in North Side.

“I have to walk a lot farther to catch the bus at North Avenue,” Ms. Hanes said.

Service on Midlothian Turnpike also has been cut to one bus, as Ms. Burno discovered. She caught the 2B bus instead of the 2C and ended up walking nearly a mile to the care center where she works with seniors after finding out the bus traveled Forest Hill Avenue rather than Midlothian Turnpike.

Ms. Pace said GRTC has been receiving plenty of feedback from riders, “which is what we want.” She said the company is compiling the information that could lead to small adjustments on some routes in the next few months and help shape GRTC’s request for city funding next year.

“We first will have to look at the cost that would be involved to carry out rider requests,” she said. “We have to live within our budget.”