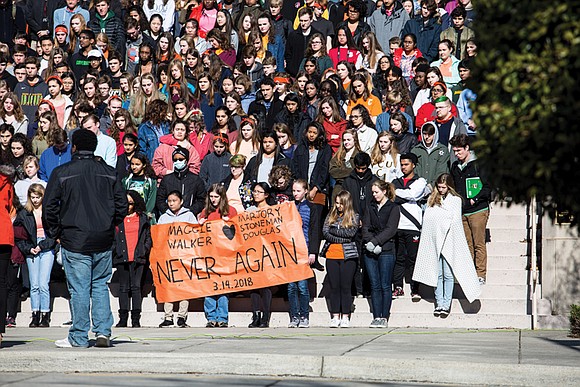 Hundreds of Richmond area students joined their peers across the country and walked out of classrooms at 10 a.m. Wednesday to demand stricter gun laws in a national show of unity and solidarity one month after the bloody massacre that killed 17 students and staff at a Florida high school.

Roughly half of the 751 students at the Maggie L. Walker Governor’s School for Government and International Studies marched out and stood on the front steps of the Lombardy Street school.

Like many of the demonstrations across the country, the students’ walkout lasted 17 minutes to honor of the 17 lives lost when Nikolas Cruz, a former student at Marjory Stoneman Douglas High School in Parkland, Fla., opened fire on Feb. 14. He was armed with an AK-15 military-style assault rifle.

Seventeen Maggie Walker students each read a 20-second tribute to one of the dead in Florida. Several in the crowd, wrapped in coats and blankets in the morning chill, held a sign stating, “Never Again.”

The tributes were followed by a moment of silent prayer. The emotional tribute brought some students to tears.

The students gathered behind the bust of Maggie L. Walker, the noted Richmond banker and businesswoman who advanced a myriad of justice and civil rights issues in the early 20th century.

The Richmond students, like those across the country, want Congress to ban assault weapons, require universal background checks before gun sales and pass a law that would allow courts to disarm people who display warning signs of violent behavior.

Co-organizer Catherine Qian, a senior from Chesterfield County, sobbed when she delivered a tribute to 15-year-old Peter Wang, one of the Florida students who was killed in the massacre. He died wearing his JROTC uniform, holding a door to help others escape. He loved JROTC and dreamed of one day entering the U.S. Military Academy at West Point.

“I thought about my brother in the eighth grade who was just accepted to Maggie L. Walker and wants to go to West Point,” Ms. Qian said in an interview after the walkout. “I couldn’t help but see my brother in Peter Wang’s shoes and the fact that this could happen to people just for coming to school and trying to get an education. This is unconscionable to me.”

Students used social media, word of mouth and coordination with the Walker administration and director, Dr. Robert Lowerre, to organize the walkout.

“We have a duty as high school students to remember the victims at Parkland,” said Adam Sachs, a junior from Henrico County, who also helped to organize Wednesday’s event.

“We are here to stand up against the underlying reason for these people being killed and to demand that our legislators fight for gun control. We need to see some legislative action to protect the lives of people and students instead of picking a piece of metal — a gun.”

The demonstrations were prompted by EMPOWER, the youth branch of the Women’s March. Students from snowy Boston to Columbine High School in Colorado, where 13 people students were killed in a 1999 mass shooting, participated in the walkout. Students who survived the Sandy Hook Elementary School attack in December 2012 in which 27 people were killed walked out of Newtown High School in Connecticut.