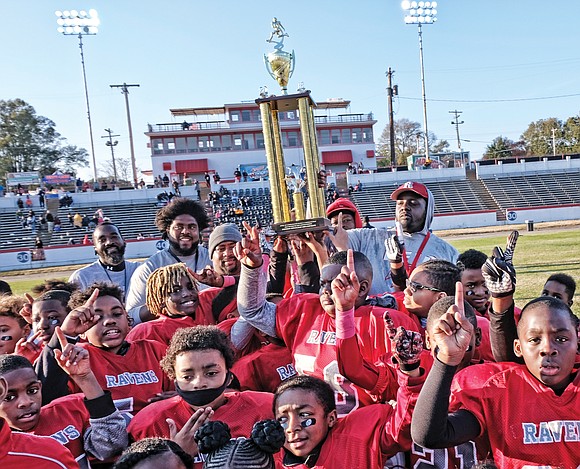 Players and coaches with the Richmond Parks and Recreation 2018 Champion Reid Ravens celebrate after defeating the Hotchkiss Eagles 18-0 in the 10U Peewee division last Saturday at City Stadium. Photo by Sandra Sellars Richmond Free Press

The Snoop League was founded by rapper and entertainer Snoop Dogg in 2005 in Southern California. The league now has about 20 teams throughout California.

They are Excel to Excellence championship teams U8 RVA Skins, U10 Virginia Vipers, U12 King William and Richmond Parks and Recreation championship junior U14 team Battery Park.

The city’s U14 team runs in partnership with E2E.

There are no Snoop League nationals for winners of the U6 and U11 age groups.

Excel to Excellence was founded by former NFL fullback Michael Robinson, who was a standout at Varina High School in Henrico County and later at Penn State before being drafted by the San Francisco 49ers in 2006.

Robinson later played for the Seattle Seahawks from 2010 to 2013, helping the Seahawks to a Super Bowl XLVIII victory over the Denver Broncos in February 2014.

This year’s championship games and winners: