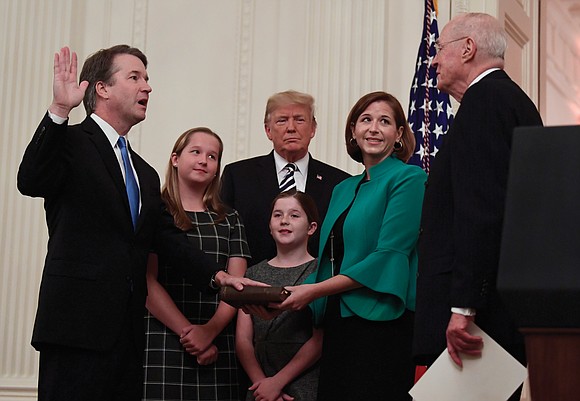 With President Trump watching, Justice Brett Kavanaugh is sworn in as a U.S. Supreme Court associate justice Monday during a televised ceremony in the East Room at the White House. Retired Justice Anthony Kennedy, who Justice Kavanaugh replaces on the nation’s high court, performed the ceremony. With the new justice are his wife, Ashley, and daughters Margaret, left, and Liza. Susan Walsh/Associated Press

Justice Brett Kavanaugh spent a collegial first day on the bench as an associate justice on the U.S. Supreme Court on Tuesday that contrasted sharply with the venom of his confirmation process, taking an active role in arguments alongside his eight new colleagues.

Justice Kavanaugh, a veteran of such proceedings after 12 years on an influential U.S. appeals court in the District of Columbia, looked at ease as he asked several questions during two hours of lively oral arguments involving a federal sentencing law for repeat offenders.

It seemed like business as usual in the ornate courtroom, three days after Justice Kavanaugh was confirmed by the Republican-led U.S. Senate despite being accused of a teenage sexual assault by a now university professor.

In late September, Dr. Christine Blasey Ford went public with allegations that Justice Kavanaugh sexually assaulted her in 1982 when they were high school students in Maryland. Two other women also accused Justice Kavanaugh of sexual misconduct dating to the 1980s.

In dramatic testimony before the Senate Judiciary Committee, Dr. Ford, who now lives and teaches in Northern California, recounted how Justice Kavanaugh, then 17 and drinking heavily, pushed her into a bedroom and pinned her to a bed, attempting to remove her clothing, grinding into her and covering her mouth.

Dr. Ford told the Senate Judiciary Committee she was “100 percent” certain the person who assaulted her was Justice Kavanaugh.

In his testimony, Justice Kavanaugh vehemently denied the allegations and accused Democrats of an “orchestrated political hit.”

The hearing resulted in a five-day FBI investigation into the allegations that critics said never included interviews with Dr. Ford, Justice Kavanaugh and many others who said they had information. The FBI report, which was available to senators, was never made public.

A bitterly divided Senate voted 50-48 last Saturday to confirm Justice Kavanaugh, with his only support from Democrats coming from Sen. Joe Manchin of West Virginia who is facing a re-election battle. It was the closest confirmation vote for a Supreme Court justice since 1881.

The confirmation gave President Trump, the Republican who nominated Justice Kavanaugh for the post, a political victory ahead of crucial Nov. 6 congressional elections. His confirmation cemented a conservative majority on the court that could last for years.

He was sworn in quickly on Saturday evening, followed by a televised swearing-in ceremony Monday evening at the White House, where President Trump apologized to Justice Kavanaugh and his family “for the terrible pain and suffering you have been forced to endure” during the confirmation process. He also proclaimed that Justice Kavanaugh was “proven innocent” after a “campaign of political and personal destruction based on lies and deception.”

Justice Kavanaugh took his seat at the right end of the courtroom’s mahogany bench — the location assigned to the court’s junior-most member. He wore traditional black robes like the other justices.

Retired Justice Anthony Kennedy, the 82-year-old jurist who Justice Kavanaugh replaced, was in the courtroom, as were members of the new justice’s family.

With police standing by, a small group of protesters demonstrated outside the Washington courthouse, holding signs saying, “Shame” and “He sits on a throne of lies,” while chanting, “This isn’t over, we’re still here.”

With courtroom security tight, there were no disruptions by protesters during the arguments, as there had been during the confirmation hearings and Senate vote.

“We wish you a long and happy career in our common calling,” Chief Justice Roberts told Justice Kavanaugh, who could serve for decades in the lifetime job.

Justice Kavanaugh is expected to push the court further to the right as he is replacing Justice Kennedy, a conservative who sometimes voted with the liberal justices on key social issues such as abortion and gay rights.

Tuesday’s cases involved the 1984 Armed Career Criminal Act, a “three-strikes-and-you’re-out” criminal sentencing law that boosts prison sentences for people who are convicted of crimes involving guns if they previously have been convicted of certain other crimes.

The cases, involving a Florida robbery and burglaries in Tennessee and Arkansas, challenged the types of crimes that qualify as violent felonies under that law and can lead to 15-year mandatory minimum sentences.

Chief Justice Roberts prompted laughter when he described asking his law clerks to try to grab a dollar bill from his hand to determine if that constituted a violent act.

“I’m not saying nobody could do it ... but it requires a lot of force, more than you might think,” Justice Roberts said.

Based on Tuesday’s arguments, defendants could win in both cases, with liberal justices likely to be joined by some conservatives in the majority. Justice Kavanaugh appeared less sympathetic to the defendants than Justice Gorsuch.