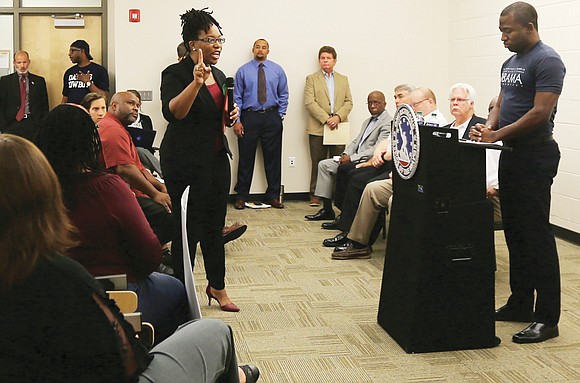 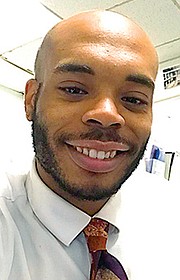 That’s the ruling Richmond Commonwealth’s Attorney Michael N. Herring has applied to the bizarre and tragic case of 24-year-old Marcus-David Peters, the unarmed man who was fatally shot by a police officer last spring off of Interstate 95 while apparently suffering mental distress.

Mr. Peters was a highly regarded high school biology teacher in Essex County, where he had earned a reputation as a caring and capable educator, according to Mr. Herring.

Outside the classroom, Mr. Peters, who was known for his sense of humor and positive attitude, volunteered building houses with Habitat for Humanity and worked part time in security at The Jefferson Hotel in Downtown.

But he was far different when he was shot after crashing his car on May 14 in a grassy area beside the Chamberlayne Avenue ramp leading to Interstate 95.

Then, he was naked and running full bore at Richmond Police Officer Michael Nyantakyi while yelling that he would kill the 10-year veteran, according to a 17-page report Mr. Herring issued Aug. 31.

“The officer reasonably regarded Mr. Peters as a direct threat to his life and to the safety of those around him,” and did not break the law in firing the two shots that killed Mr. Peters, according to the detailed report Mr. Herring co-authored with Assistant Commonwealth’s Attorney LaToya H. Croxton.

“The use of deadly force was … necessary given the unique circumstances,” the report states.

As a result, Officer Nyantakyi will not face any criminal charges, Mr. Herring stated in a finding that was widely anticipated.

The officer, who like Mr. Peters is African-American, has been on paid administrative leave since the shooting. As a result of Mr. Herring’s finding, Officer Nyantakyi is now on desk duty, the department disclosed, but won’t return to full duty until an internal probe determines that he followed department policy for using deadly force.

Police Chief Alfred Durham has reported firing or forcing the resignation of 19 officers for policy violations since he took office in 2015 and has said he has three more dismissals pending. But Officer Nyantakyi is not expected to be among them, despite the continuing debate about his actions and department policies on handling mentally ill individuals.

In a community where gunfire is all too common and killings by individuals without a badge have claimed the lives of 34 people already this year, the slaying of Mr. Peters has remained a standout, fueled by the anger of his sister, Princess Blanding, and allies who see him as another unarmed black man gunned down by a law enforcement officer.

An educator herself and former assistant principal at Essex County High School, Ms. Blanding condemned Mr. Herring’s decision to clear Officer Nyantakyi of criminal wrongdoing at a gathering of supporters last Friday afternoon outside the John Marshall Courts Building where Mr. Herring and his staff are based.

Decrying the report as an effort to “demonize and dehumanize” her brother, Ms. Blanding insisted that “there is no justification for why Marcus isn’t here right now. We will fight to see that this doesn’t happen again.”

She and others want the city to create a civilian review board to investigate police shootings and also want officers to have more options for using non-lethal force.

Mr. Herring’s report does not include any recommendations for policy changes and essentially supports and confirms previous city Police Department statements about the events that led to the shooting.

During an earlier news conference last Friday morning at the courts building, Mr. Herring said, “I don’t know how it could have been done any differently.”

According to the report, Mr. Peters had smoked marijuana after getting home from the high school and then drove to The Jefferson Hotel, where he ended up stripping off his clothes inside the hotel and driving away naked.

Officer Nyantakyi got involved after seeing Mr. Peters crash into a car at Franklin and Belvidere streets and speed off northbound on Belvidere Street.

The officer also saw Mr. Peters leave his car after crashing by the interstate entrance ramp and dash onto I-95, where he was struck by a car and rolled and flapped around on the highway.

While the officer reported via radio that Mr. Peters appeared mentally unstable and requested backup, the reports states, “The officer couldn’t stand by and let Mr. Peters continue to break down on 95.”

While much of the story in the report is known, the pages offer new insights into the case.

That includes Mr. Peters’ previously undisclosed use of a cocktail of marijuana and unprescribed Ritalin, a drug used to treat attention deficit disorder, but which can create erratic and psychotic behavior in some.

Ms. Blanding insisted her brother did not illegally use drugs and also had touted an autopsy report as finding none.

However, residue from the Ritalin and THC, the active ingredient in marijuana, were disclosed in a separate toxicology report that was released later.

Mr. Herring’s report notes that investigators turned up a witness who admitted giving Mr. Peters a bottle of generic Ritalin and another who said Mr. Peters admitted taking the medicine. Evidence also developed about Mr. Peters’ use of marijuana.

According to the report, Mr. Peters’ mental decline “started one to two weeks before his death.”

One witness told investigators that Mr. Peters had been acting “a little bit weird” in the week before the shooting, the report noted. There also were concerns about Mr. Peters’ strange behavior at school, the report stated, adding that one witness claimed that Mr. Peters’ relatives discussed the situation on Mother’s Day, the day before he was shot.

The report seeks to make it clear the shooting of the Virginia Commonwealth University graduate was tragic, but the result of Mr. Peters’ specific actions that day.

“Regardless of the cause of Mr. Peters’ behavior, whether it was the result of a mental health crisis or whether it was drug induced, he was acting erratically and dangerously,” the report states.

“In no way are we suggesting that individuals suffering from mental illness should be killed by law enforcement,” the report continues. “Indeed like most Richmonders, we are disturbed by the outcome, particularly because Mr. Peters was an accomplished young man devoted to public service.”

Ms. Blanding and her supporters are fervent in their belief that Mr. Peters would be alive today if the department trained officers to use non-lethal options for dealing with people with mental issues.

The report notes that Officer Nyantakyi first fired a Taser in seeking to stop Mr. Peters, but that did not work. One of the two prongs did not connect.

The report called ideas that the officer could shoot to wound an unrealistic fantasy that is promoted by TV dramas and movies.

The report also stated that Officer Nyantakyi considered engaging hand-to-hand with Mr. Peters but did not “because of Mr. Peters’ erratic behavior, his unresponsiveness to pain after being hit by a car when he ran into the roadway and fear that Mr. Peters might land on top of him.”

Still awaiting backup units, the officer indicated he knew Mr. Peters was unarmed when the teacher rushed him, but indicated that Mr. Peters was grabbing him and his gun when he fired, the report states.

To the officer, “it was ‘an all-out fight between the two’ to gain control of the gun,” the report continues

The officer only fired when Mr. Peters continued to charge, the report states.