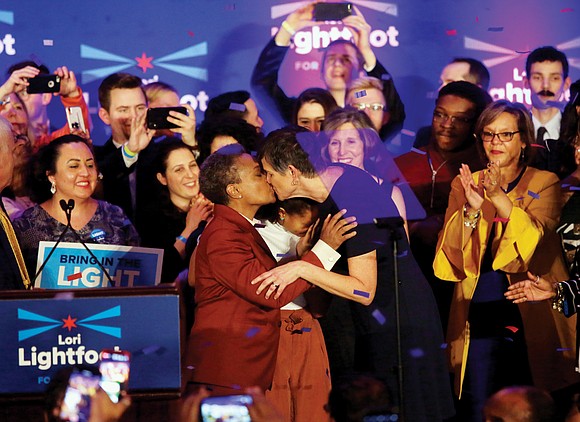 Lori Lightfoot’s victory in the Chicago mayor’s race signaled hope among voters that the nation’s third-largest city may someday move beyond long-entrenched divides, racial and otherwise, that have left large parts of the metropolis feeling ignored by people in power.

Mayor-elect Lightfoot became the city’s first black female and first openly gay mayor when she defeated another black woman, Cook County Board President Toni Preckwinkle, in Tuesday’s election. She joins Chicago’s top prosecutor and police chief as black leaders in a city that continues to struggle with race relations.

But the significance of her win also transcended race or gender. Ms. Lightfoot was the outsider, a little-known former federal prosecutor who grew up in Ohio and had never been elected to public office, much less climbed through the ranks of Chicago’s Democratic machine. Yet she toppled some of the biggest political names and most powerful leaders in the city with a promise to end political corruption and be a voice for low-income and minority people and neighborhoods.

“Today is April 3, a new day for all of Chicago,” Ms. Lightfoot said Wednesday at a news conference called by the Rev. Jesse L. Jackson Sr. to promote post-election unity. Ms. Preckwinkle stood beside her.

The tension between police and residents exploded in protests following the 2014 fatal shooting of 17-year-old Laquan McDonald by a white police officer. The officer, Jason Van Dyke, was sentenced earlier this year to fewer than seven years in prison for second-degree murder.

Chicago also has seen its population drop, due largely to thousands of black residents leaving neighborhoods on the South and West sides — areas South Side resident and political consultant Delmarie Cobb describes as “gutted.” At the same time, downtown and predominantly white neighborhoods on Chicago’s North Side have been growing and glistening with new investment.

For black residents, “you can’t help but feel that the city and the city leaders have turned their backs on you,” Ms. Cobb said.

“When you see hundreds of thousands of black people leaving” a city that once had a reputation as being the land of opportunity for black people, “people want to know that somebody is going to speak for them,” Ms. Cobb added.

Finley Campbell, a spokesman for the Chicago-based Unitarian Universalist Multiracial Racial Unity Action Council, said part of what makes Ms. Lightfoot’s win historic is that she reached out successfully to white voters.

She earned broad support, receiving about three-fourths of the total vote and winning all 50 Chicago wards. Her margins of victory ranged from about 8 percentage points in a largely black South Side ward to as high as 75 percentage points in predominantly white wards on the North and southwest sides.

“It is historic because a black, openly gay sister is out there,” Mr. Campbell said. “What’s also historic for me is she reached out very successfully to the white ethnic community, where you have traditional Polish, German, Irish-type people. There’s also a connection to the firefighters and police department, and working-class people. Her ability to say ‘I will represent you, too,’ accounts for it being successful.”

Ms. Lightfoot said she took Tuesday’s results as a mandate for change, and that she plans to “take full advantage of it.” But she noted there is much difficult work ahead.

“Honeymoons come and go, and I want to make sure we’re doing all we can to really breathe life into the historic nature of this election,” she said.