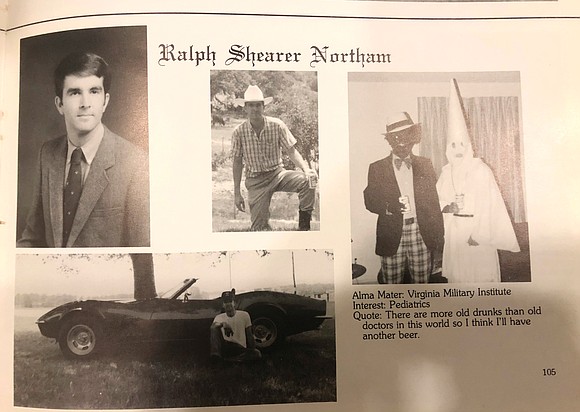 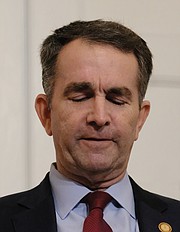 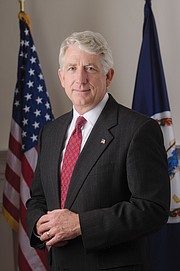 In the suddenly topsy-turvy world of Virginia politics, one fact is certain: Ralph S. Northam is still Virginia’s governor.

He also has no immediate plans to resign, despite the uproar and the torrent of calls for him to quit the office some believe he is no longer fit to hold.

The sudden reversal of fortune began when Big League Politics, a conservative, Republican-leaning news and opinion blog, posted on Friday a 35-year-old yearbook photo that appears under the governor’s name showing two people, one in blackface and the other in a Ku Klux Klan robe and hood.

The blog indicated that it was tipped off to the forgotten photo published in the 1984 edition of the Eastern Virginia Medical School yearbook by a former classmate upset with Gov. Northam’s stance on abortion.

Struck by an avalanche of criticism, the governor initially issued an apology on Friday.

“I am deeply sorry for the decision I made to appear as I did in this photo and for the hurt that decision caused then and now. This behavior is not in keeping with who I am today and the values I have fought for throughout my career in the military, in medicine and in public service. But I want to be clear, I understand how this decision shakes Virginians’ faith in that commitment,” he stated.

He pledged to do everything he could to restore the public’s trust in him.

But at a Saturday news conference, Gov. Northam recanted the apology.

Instead, the 59-year-old genial pediatric neurosurgeon with a reedy voice urged people to trust his word that he was not one of the two people in the photo, a position that began gaining support this week as published reports began surfacing in which former classmates agreed that other students were in the photo.

Gov. Northam, who also was criticized for dressing up as a plantation owner at Halloween, said at the news conference that he had never seen the photo because he finished medical school and started a residency program with the Army Medical Corps in San Antonio, Texas, and did not purchase a copy.

The governor also said that while he blackened his cheeks with shoe polish later that year in dressing up like his favorite entertainer, Michael Jackson, to compete in and win a dance contest in San Antonio, he said he was certain the yearbook photo was not his and that he was not one of the two people pictured.

As the governor fought to clear his name, he gained unexpected relief from the controversy when Lt. Gov. Justin E. Fairfax and Attorney General Mark R. Herring both came under their own clouds.

Lt. Gov. Fairfax, a single Columbia University law student at the time, was working on a political campaign.

By Tuesday, the lieutenant governor had displaced Gov. Northam in the headlines as he sought to defend himself. Lt. Gov. Fairfax insisted the encounter with Dr. Tyson was consensual after Big League Politics also spread the information based on an email the blog said was provided by a Richmond friend of Dr. Tyson, Adria Scharf, executive director of the Richmond Peace Education Center and wife of Dr. Thad Williamson, a University of Richmond professor who has been a top adviser to a potential gubernatorial rival of Lt. Gov. Fairfax, Mayor Levar M. Stoney.

Then on Wednesday, Mr. Herring, 57, who had urged the governor to resign in favor of Lt. Gov. Fairfax, issued an unexpected admission about his own blackface episode.

Mr. Herring said in 1980 when he was a 19-year-old college student, he and friends “dressed up and put on wigs and brown makeup” and went to a party portraying “rappers they listened to at the time, like Kurtis Blow.”

Mr. Herring, who immediately resigned as co-chair of the Democratic Attorney Generals Association, called his actions a product of “our ignorance and glib attitudes” and a lack of “appreciation for the experiences and perspectives of others.”

He said in the years since, the memory has caused him “deep regret and shame,” though he added that the past conduct “is in no way reflective of the man I have become in the nearly 40 years since.”

The upheaval has come amid a fast-moving General Assembly session when Gov. Northam is a key player in shaping legislation and Lt. Gov. Fairfax presides over the state Senate.

Amid the new revelations, Gov. Northam was bolstered by Republican House Speaker Kirk Cox’s public statement Monday that the yearbook photo could not be considered an impeachable offense and the fact that the governor’s aides and members of his cabinet have stuck with him rather than resigning. He is soldiering on.

On Tuesday, for example, Gov. Northam quietly signed legislation providing a $750 million package of incentives for Amazon, which plans to open part of its East Coast headquarters in Northern Virginia.

For those who denounced the governor in the wake of the photo — particularly a wide swatch of elected Democrats near and far — it was simpler when they could take an unforgiving stance solely involving Gov. Northam.

Take the 21-member Virginia Legislative Black Caucus, which has urged the governor to resign and end the turmoil.

“We amplify our call for the governor to resign,” the Caucus stated Saturday after listening to Gov. Northam’s press conference. “He has irrevocably lost the faith and trust of the people. Changing his story now casts further doubt on his ability to gain that trust.”

But the Caucus is among many looking for a fallback position with the new revelations involving the two other top Democratic leaders, notably Lt. Gov. Fairfax, who is first in line to succeed to the office if Gov. Northam resigns.

The Caucus, led by Henrico Delegate Lamont Bagby, did not comment Wednesday on how their members will deal with a governor they have labeled a pariah, but whom they might have to work with. Most of the Richmond legislative delegation also didn’t comment. The only response has come from Delegate Betsy B. Carr, D-69th, who responded on her plan of action with Gov. Northam remaining in office: “As I have always done, I will support and advocate for legislation that helps my constituents and the Commonwealth. I work each and every day to improve the lives of Virginians, and I will continue to do that.”

At this point, it appears the African-American community is far from unanimous. Some want Gov. Northam to stay on the job, while others continue to call for his resignation.

For example, two African-American pastors in the Richmond area, Bishop Charles A. West and the Rev. Dwayne E. Whitehead, told the Free Press they do not believe the governor should resign.

“I don’t think that something that happened 35 years ago should dictate what happens to us now. We are not the same person we were,” Bishop West said.

“Who of us does not have things that we did as immature youths that we now regret?” asked Rev. Whitehead.

“This reaction to that photo is overblown,” said Jacqueline German, who has an office cleaning business. “I don’t really care what happened 35 years ago. I care about what is happening now. Gov. Northam has done some good things, and I want him to continue doing his job.”

It is still murky as to how much fallout there will be from the yearbook photo.

The College of William & Mary rescinded its invitation to Gov. Northam to attend Friday’s inauguration of its new president at its Charter Day ceremony.

Whether Gov. Northam will face similar rejection from other institutions and organizations that traditionally would want him to participate remains to be seen.

For now, there are only questions. Will he find himself barred from attending the National Governors Association and be struck from the list of potential graduation speakers at Virginia’s public universities?

Will executives of businesses that are opening or expanding in Virginia want to appear with him?

Can he still raise money to help Democratic candidates during the upcoming General Assembly elections in which Democrats were seeking to take control of the legislature from Republicans? Or will the Democratic Party nominees run away from him?

Whatever the future holds, Gov. Northam appeared to spell out his approach to life in his inaugural address when he urged his listeners to embrace hope.

“Hope is not just a source of comfort for the afflicted,” he said. “It is a wellspring of energy to fight for a better tomorrow, no matter what the odds.”

“We amplify our call for the governor to resign. As we stated yesterday (Friday, Feb. 1), we met with the governor, looked him in the eye and expressed our deep sense of betrayal, pain and disappointment. During our meeting, both the members of the Virginia Legislative Black Caucus and Gov. Northam were direct and honest with each other.

“In light of his public admission and apology for his decision to appear in the photo, he has irrevocably lost the faith and trust of the people he was elected to serve. Changing his public story today (Saturday, Feb. 2) now casts further doubt on his ability to regain that trust.

“At a critical juncture in this legislative session, we need to focus on the important work of governing. We cannot continue this work with Gov. Northam at the helm. The damage that has been done by these revelations is irreparable. Our confidence in his ability to govern for the over 8 million Virginians has been eviscerated.

“Another moment should not pass before we hear Gov. Northam do the honorable thing and resign.”

“I stated earlier that Gov. Northam’s continuing in office was his choice to make. It is difficult for anyone who watched the press conference today (Saturday, Feb. 2) to conclude that he has any other choice … but to resign.”

Given recent news accounts about and statements made by Ralph Northam, the Virginia State Conference NAACP (is) saddened about this situation.

After resigning, we ask Ralph Northam, his successor, legislators, other public officials along with Virginia’s most powerful corporate leaders to work with the state NAACP’s leaders in genuine efforts to restore trust for African-Americans and others.”