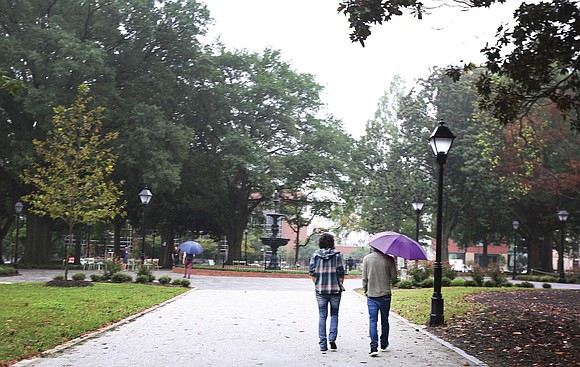 Add Monroe Park to the list of troubled projects for the city Department Public Works.

The department, which is under fire for the still-incomplete revamping of the 17th Street Farmers’ Market after two years, is facing criticism over the quality of the material and workmanship on the gray stone paths installed at Monroe Park during the $7.8 million renovation.

Rain is carving ruts and eroding the paths that DPW’s capital projects division authorized and installed during the park’s overhaul. The paths have become hazardous for cyclists and pedestrians since the park reopened in September 2018. Periodic replacement of the stone dust has been required.

Complaints about the paths also have been made to Alice McGuire Massie, president of the public-private Monroe Park Conservancy that manages the park for the city.

Ms. Massie confirmed the problems with the paths that apparently were first identified by Charles Woodson of the advocacy group Fans of Monroe Park soon after the reopening. He has mentioned problem repeatedly in social media posts.

She said the conservancy is working with its maintenance partner, Virginia Commonwealth University, to find a non-tar material that could better handle rain and other conditions. VCU has been reviewing materials and hopes to begin running tests soon, she said.

“We’re working with materials that do not wash away and are in keeping” with the historical look and feel of the paths in the park that dates to 1851, Ms. Massie said.

Sharon North, DPW spokeswoman, stated that Ms. Massie and Mr. Woodson served on the Monroe Park Advisory Committee for the park’s improvement and have known since the 2008 adoption of the park’s master plan that the paths might be troublesome.

Ms. North noted that the master plan’s consultant, Rhodeside & Harwell, “advised that stone dust was an inexpensive and easily installed paving material” that harkens back to the park’s early days, but added that the “one significant drawback to stone dust paving is the amount of maintenance required” to restore it after rain.

Mr. Woodson responded that MPAC recommended the stone dust be placed over “the existing concrete and asphalt sidewalks,” following the successful model used by Colonial Williamsburg.

Instead, he said DPW and its contractors removed all of the paved surfaces and installed the dust over dirt, which he said created the problem.

“MPAC had no say in this decision,” Mr. Woodson stated. “I was amazed when I heard they were removing all of the paving, as it raised the cost of the pathway installation exponentially.”

Ms. Massie also noted that Mr. Woodson has blamed the conservancy for DPW’s recent use of the herbicide Roundup on the park’s Laurel Lawn that faces Laurel Street.

She said the herbicide’s application represented a first step to installing tougher, drought-resistant sod to replace grass killed in May, but she said that the decision on Roundup’s use was made by DPW, not the conservancy.

The grass died when credit card giant Capital One once again put up a hospitality tent for employees attending company-sponsored programs at the Altria Theater across the street from the park. This was the third year the McLean-based company has held such a Richmond event for employees from the Mid-Atlantic region.

Ms. Massie said she has been told that current plans call for installation of TifTuf Bermuda grass sod this month to restore the Laurel Lawn, but she said that the conservancy would not have authorized the use of Roundup, a commonly used herbicide since 1974.

She said that the use of the glysophate-based product violates the conservancy’s policy of working with VCU to use sustainable practices to maintain the park.

She said she and other conservancy members would have recommended the use of a vinegar solution or similar natural herbicide and is disappointed that DPW never asked the conservancy’s opinion.

In response, Ms. North confirmed that DPW used Roundup. She stated DPW continues to use the product based on the U.S. Environmental Protection Agency’s finding that glysophate continues to be safe for people and animals.

Ms. North noted that the EPA in April released its latest review of the chemical. According to the interim EPA report, the agency rejected the claim that glysophate is a carcinogen or creates public health risks.