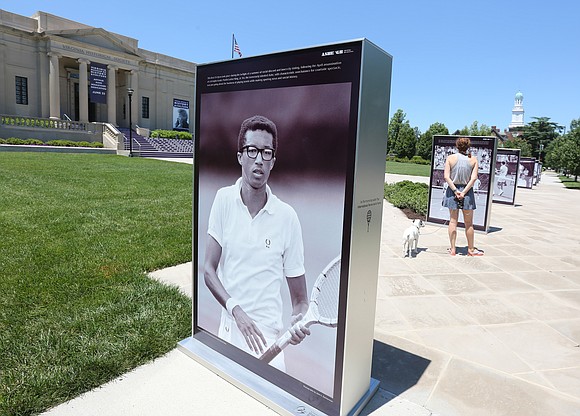 Photos of Richmond tennis star Arthur Ashe Jr. during his 1968 victory at the U.S. Open line the front sidewalk of the Virginia Museum of History & Culture at 428 N. Arthur Ashe Blvd. The installation, featuring rarely seen images of Mr. Ashe by LIFE magazine photographer John Zimmerman, is part of the celebration and dedication of Arthur Ashe Boulevard and will be on view until July 7. The installation was produced for the 2018 U.S. Open commemoration of the 50th anniversary of Mr. Ashe’s historic win. Photo by Regina H. Boone Richmond Free Press

Since Mr. Ashe’s death, the council had twice rejected renaming the Boulevard for Mr. Ashe.

Ms. Gray, who is seen by some as a potential challenger to Mayor Stoney, took up the issue with Mr. Harris. She met with civic groups in the area, as well as with businesses and top officials at the major museums, the Virginia Museum of Fine Arts and the Virginia Museum of History & Culture, which both were supportive.

She arranged for a public meeting to get comments and lobbied members of the council after learning that several had objections or wanted other roads to be considered, including the Downtown Expressway.

Ms. Gray persisted, despite a backlash from some residents

Ms. Gray said she went into the Feb. 11 City Council meeting unsure if the measure to rename the street would pass.

Now, despite all her work, Ms. Gray appears to be relegated to the audience.

• Arthur Ashe Boulevard Tennis Under the Lights Event & Movies at the Park, 6 to 9 p.m. Byrd Park Tennis Courts. Doubles tennis play for all on the courts, plus a showing of “The Lego Movie 2: The Second Part” at 8 p.m.

• Opening of exhibit “Determined: The 400-Year Struggle for Black Equality,” 12:30 to 5 p.m., Virginia Museum of History & Culture, free tour of new exhibition on the black experience in Virginia.

All events are free and open to the public.