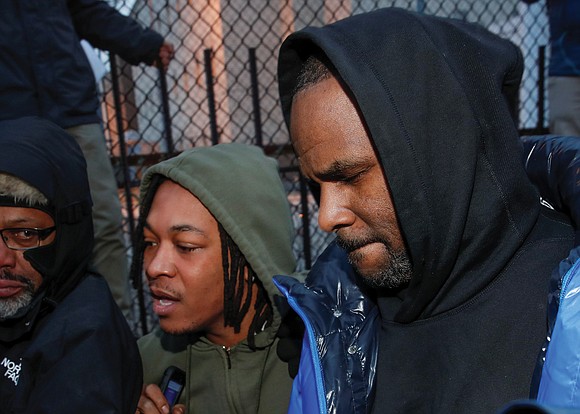 Grammy-winning R&B star R. Kelly pleaded not guilty on Monday to charges that he sexually assaulted three teenage girls and a woman in alleged incidents dating back to 1998, weeks after a television documentary leveled new accusations against him.

The 52-year-old performer, whose real name is Robert Sylvester Kelly, was charged in a 10-count indictment returned last Friday by a Cook County grand jury in Chicago, and later surrendered to police. If convicted, he would face up to seven years in prison for each count.

Bond was set last Saturday at $1 million, and Mr. Kelly remained locked up over the weekend.

On Monday morning, Mr. Kelly, wearing an orange jail jumpsuit, appeared in a Chicago courtroom before Associate Judge Lawrence Flood and spoke only to confirm his name. His lawyer, Steven Greenberg, entered a not guilty plea on Mr. Kelly’s behalf.

“Mr. Kelly has done absolutely nothing wrong,” Mr. Greenberg told reporters. “No one has showed us any evidence that he has done anything wrong.”

Mr. Kelly, best known for his hit single “I Believe I Can Fly,” had been confined to a prison hospital ward to keep him apart from the general inmate population, his lawyer said.

Prosecutors said Mr. Kelly’s alleged victims include a teenager he met when she sought an autograph during his 2008 trial on child pornography charges, another he met at her 16th birthday party and a third, a hairdresser, who was 24 at the time. The singer was acquitted of the 2008 pornography charges.

A fourth charge is based on a videotape that purportedly shows Mr. Kelly and a 14-year-old girl engaged in sexual acts, according to prosecutors.

Prosecutors in the 2008 case also introduced a video as evidence against Mr. Kelly, but the victim did not testify. The new charges emerged in a different environment after the #MeToo movement had made accusers more willing to come forward and law enforcement more likely to believe them.

Attorney Michael Avenatti, who said he represents two of the alleged victims in the indictment and a third accuser, told reporters after Monday’s hearing that he had turned over a second videotape to prosecutors earlier in the day. The 55-minute video that dated from around 2000 also showed a 14-year-old girl, although Mr. Avenatti did not specify whether it was the same girl as in the first video.

Mr. Avenatti said he obtained both tapes from two “whistleblowers” who he also represents, but said none of his clients appear in either video.

The charges against Mr. Kelly come just weeks after the Lifetime television network aired a six-hour documentary series, “Surviving R. Kelly,” in which multiple women accused him of sexual misconduct and abuse.

Los Angeles-based lawyer Gloria Allred said she represents six women who have come forward to accuse Mr. Kelly of sexual abuse, including some who were featured in the documentary. But she said none of her clients are included in the Cook County case.

At least four law enforcement agencies outside Cook County have opened investigations into her clients’ complaints, Ms. Allred told a news conference on Monday, including the New York Police Department and federal prosecutors in Brooklyn.