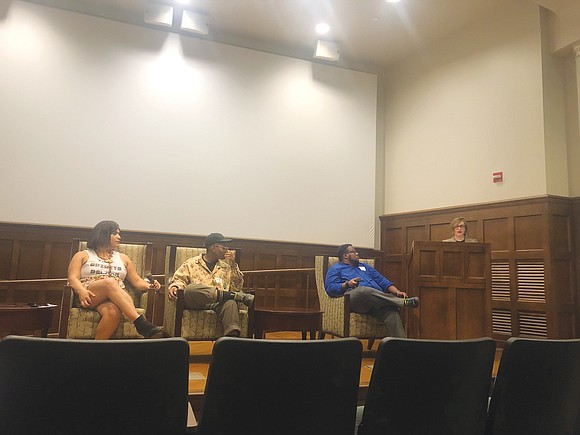 From left, panelists Xemi Tapepechul, Justina Hall and Nathaniel Preston speak about the importance to include trans, gender non-conforming and non-binary people of color into LGBTQ spaces at Saturday’s Transgender Information and Empowerment Summit. The moderator is Olive Gallmeyer. VCU Capital News Service

Hundreds of transgender people and their allies gathered last Saturday in Richmond for a 'trans conference' focused on providing resources to the LGBTQ community.

Equality Virginia held its 6th Annual Transgender Information and Empowerment Summit for the first time at the University of Richmond.

Organizers said the TIES summit is held annually to give Virginia’s transgender community a safe space where they can learn and gain resources.

Attendees had access to free legal resources, such as name or gender change guidance, and free medical and mental health consultations. Around 40 workshops focused on housing issues in the transgender community, LGBTQ suicide prevention, advocacy and other topics.

“As we know, but the story is not often told, much of the groundbreaking LGBTQ grassroots has been by trans and non-binary people of color, yet rarely are their contributions recog- nized, ” said James Parrish, executive director of Equality Virginia.

Panelists answered questions from the moderator and audience, including inquiries about medical assistance for transgender patients and helping transgender youths.

“We just need more inclusive groups and counselors who go through LGBTQ-affirming training,” said panelist Justina Hall, youth peer navigator for the Virginia-based Nationz Foundation, a nonprofit organization that provides health and wellness for the LGBTQ community. “Understand that sometimes people don’t have the language to kinda place what they’re experiencing and going through.”

According to the Human Rights Campaign, an advocacy group working to protect the LGBTQ community’s civil rights, transgender women of color are more likely to be victims of murder compared to non-transgender women of color. The organization said the “intersections of racism, sexism, homophobia, biphobia, transphobia and unchecked access to guns” also makes it harder for transgender people of color to gain employment, housing and health care.

“I think a big reason that the murder rate is very high for trans women of color, in particular, is that we often don’t see transgender women as women,” said Ted Lewis, executive director of Side By Side, which provides support to LGBTQ youths. “I think as you lay on multiple underrepresented repressed identities, (that) being a woman, being transgender, being a person of color, being black within that sort of umbrella — it gets hard real fast.”

The representative from the American Civil Liberties Union said transgender voters should have an equal opportunity to choose candidates who fight for their rights and that having an ID that doesn’t match your gender identity should not affect your right to cast a ballot.

“We don’t even want people hesitating about it because then they might not vote, and we need everybody to vote,” Mr. Parrish said.

He noted that Equality Virginia has been working to get people registered to vote along with letting voters know which candidates are pro-LGBTQ, so Virginia can have “a more supportive General Assembly.”

The organization recently formed the Vir- ginia Values Coalition, which is calling on state lawmakers to establish legal protections for the LGBTQ community.

“We hope to arrive at the General Assembly with thousands of people behind us,” Mr. Parrish previously told the Capital News Service.