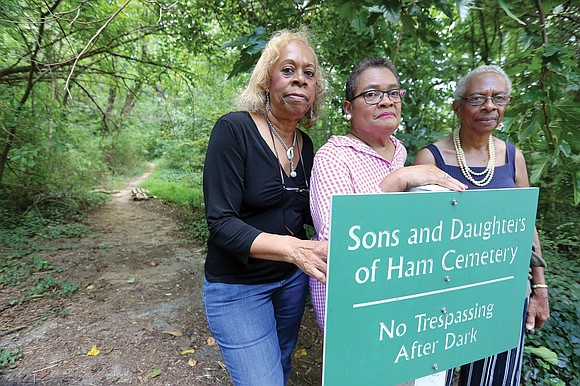 From left, Diane W. Jones and her sister, Carolyn W. Moten, and cousin Linda T. Nash stand in front of the sign for the overgrown cemetery in Henrico County where their relatives are buried and which they are working to restore. Photo by Regina H. Boone

Dense woods fill much of a largely uncelebrated and essentially abandoned African-American burial ground in Henrico County that had been best known in recent years as a practice area for University of Richmond runners.

While they no longer use it, their pounding feet kept a path winding through the graveyard clear of vegetation.

The untended state of the cemetery could change now that a handful of people are getting involved with it, just as improvements have come to previously neglected private and public African-American cemeteries such as the Evergreen and East End cemeteries on the city’s eastern border and the Barton Heights cemeteries in North Side.

In the case of the Henrico cemetery located off Chandler Road and next door to the city-owned Bandy Field, a retired Richmond pharmacist and two great-granddaughters of Moses Bradford Jr., one of the individuals buried at the site, are now on a restoration mission for the cemetery created around 1899 by a once-flourishing but now-defunct group, the Sons and Daughters of Ham.

“There is so much this one acre can teach,” said Marianne R. Rollings, 79, the former pharmacist who is lending her passion and experience as an author and editor to this cause.

Worried that UR might revive its 1998 effort to gain the property — though the school denies any such effort is underway — Ms. Rollings joined forces in April with the Bradford great-granddaughters, Carolyn W. Moten and Diane W. Jones, to create the nonprofit Friends of Sons and Daughters of Ham Inc.

The trio and other supporters have operated in secrecy, but now are going public in an effort to bring awareness to the cemetery and the need for assistance in its restoration.

They plan to reach out to people Saturday, Sept. 14, when the Richmond Symphony is scheduled to take over Bandy Field for a community concert.

Ms. Rollings said the group is working on having a booth to offer information on the beneficial group and the cemetery, potentially connect with people who have relatives buried there or meet people who have an interest in helping restore and preserve the property as sacred ground.

“We want to see the cemetery protected and restored,” Ms. Jones said.

Only about 18 people are identified as being interred in the cemetery, Ms. Rollings said. However, she added that a survey done years ago indicated there might be as many as 50 people buried there. Those identified include members of the Bradford family, along with members of the Burleigh, Overton and Sears families.

A lifelong resident of the area, Ms. Rollings feels a connection with the property through Ms. Jones’ and Ms. Moten’s mother and grandmother, Ruth Truman Winston and Grace Bradford Truman, who worked for Ms. Rollings’ family at their Richmond home.

Growing up, “they were like aunts to me,” said Ms. Rollings, who also has known Ms. Jones and Ms. Moten much of her life.

The 20 acres that is now Bandy Field was acquired by Moses Bradford Sr., father of Moses Bradford Jr., a Spanish-American War veteran and member of the Sons and Daughters of Ham. Mr. Bradford Sr. built his home on the acreage and subdivided the land for his children and other relatives to build houses. A community pool now occupies 2 acres, with the city owning the rest of what is now an undeveloped park that mainly accommodates pet owners and their dogs.

Evidence of the subdivision of about eight homes has disappeared after the city purchased the Bradford properties as a potential school site and bulldozed the houses.

Ms. Rollings said she, like many people, were very aware of the cemetery.

“Everyone knew it was there,” she said, adding that some nearby residents hope to see it restored.

She said she also is honoring her late mother, Bess Revene, who was involved in 1998 in helping Ruth Winston and her daughters fend off UR’s attempt to take the cemetery property.

UR went to court to gain ownership with the support of the three trustees of the Independent Order of St. Luke, the group that Maggie L. Walker once led and which had essentially absorbed the Sons and Daughters of Ham decades earlier. At the time of the court challenge, the order was sliding into dissolution.

Ms. Rollings said that Mrs. Winston and her daughters raised objections to the sale, and UR retreated after the order’s trustees acknowledged there was no record that the Sons and Daughters of Ham had ever transferred the cemetery property to the Order of St. Luke.

She said the failure of the suit apparently triggered a state law that requires a party that tried and failed to gain a purportedly abandoned cemetery property wait 50 years before trying again.

Ms. Rollings is hoping that by that time, the cemetery will look far different.