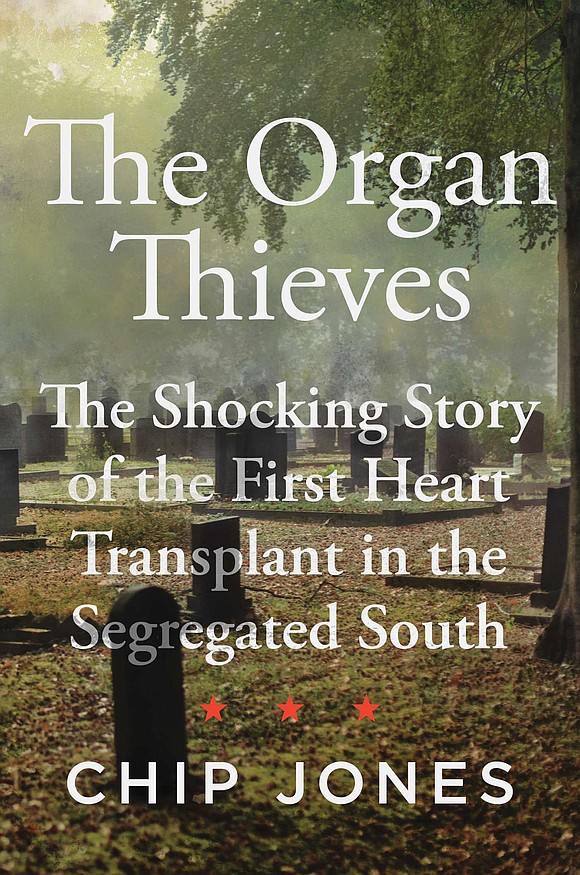 For centuries, medical doctors have been guided by ethical standards, pledging no intentional harm to patients. But lapses or disturbing, questionable, on-the-spot decisions and errors in judgment by physicians occur, undermining public confidence in health care providers and prodding the nation’s medical academy to reassess its standards.

“The Organ Thieves: The Shocking Story of the First Heart Transplant in the Segregated South,” a new fact-based book by Richmond author and veteran journalist Chip Jones, revisits the medical ethics issue as the public, politicians and health leaders offer divergent views about combating COVID-19 as thousands of people die weekly from the airborne respiratory disease.

“In 1968 and even today, this was second-class health care,” Mr. Jones told the Free Press in an interview. He stressed the need for health officials to assure the public about the ethics and safety of the current myriad efforts to halt the coronavirus.

“The Organ Thieves” focuses on the medical care given to Bruce O. Tucker, a 54-year-old African-American who, in May1968, suffered a skull fracture during a fall and was rushed to the noted Medical College of Virginia hospital for treatment.

Mr. Tucker’s tragedy came at a time when the hospital had been working for years to respectfully establish itself among medical research institutions in the field of human organ transplants.

In the era of racial segregation, MCV had a tarnished reputation dating back to its founding before the Civil War for advancing its human anatomy studies by engaging the services of grave robbers and by collecting the cadavers of dead slaves and impoverished white people. Some of the unwanted body parts were disposed of in wells and other sites that have been uncovered during the school’s expansion in recent decades.

More than a century after some of those practices occurred, Mr. Tucker unknowingly played a role in advancing the school toward its goal of becoming a leader in the field of human transplant medicine.

Within 24 hours, surgeons concluded Mr. Tucker could not recover from his serious brain injury and pronounced him “technically dead.” Then, based on that determination and without consent from Mr. Tucker or any close relatives or next of kin, the medical team removed his vital organs — from his heart to his kidneys — for transplant into a white business executive who had been in and out of the hospital with illnesses.

The hospital said Mr. Tucker’s relatives could not be located, according to Mr. Jones’ book. He found records of the hospital trying to find relatives of Mr. Tucker, even enlisting police to help by going to Mr. Tucker’s Richmond apartment where no one knew of him or any contacts. With the life clock ticking, time was running out on transplant doctors to make some decisions.

The patient in urgent need of a transplant being white hastened family concerns after Mr. Tucker’s death about whether his life had been sacrificed too quickly because he was Black, and whether Mr. Tucker had been considered by the hospital as a “charity” patient absent identifiable relatives, a status in society that im- plies a person has no wealth, rank or importance in the community.

The merits, ethics and legality of harvesting Mr. Tucker’s organs for transplant prompted Mr. Tucker’s family to file a wrongful death lawsuit against the hospital.

L. Douglas Wilder, then an aspiring young Richmond attorney who later would become governor of Virginia, was the Tucker family’s lawyer. He filed what was the first such lawsuit in the state against the hospital and the surgeon, Mr. Jones said.

Former Gov. Wilder gave Mr. Jones an interview for the book. Mr. Jones said Gov. Wilder told him it was the first time in more than two decades he had discussed the Tucker case.

The case went to an all-white jury in 1972. During his arguments, Gov. Wilder told the jury that the Tuckers were hard-working citizens of Richmond, “not derelicts,” Mr. Jones reported in the book.

Mr. Jones found that as the case went to trial, “the jury was swamped by a series of experts” produced to defend the hospital. “They claimed brain death law was not clear,” he said, a defense that persuaded the jury to deny the Tucker family’s wrongful death claim.

Gov. Wilder later wrote in a review of the case that the Tuckers “got a raw deal” with the jury finding for MCV and the doctor. “But they rewrote a new definition of ‘death’ for the nation,” Gov. Wilder wrote in his papers researched by Mr. Jones.

Mr. Tucker’s family “has never been compensated,” Mr. Jones said. “They didn’t get any money. I know the medical college is owning that some mistakes have been made. There are still some lingering suspicions about that legacy of second-class health care.”

“You can debate whether he (Mr. Tucker) would have survived,” Mr. Jones continued. “What is undoubted is how sadly he and his family were treated. The family was mistreated. They weren’t informed of the transplant,” he said, acknowledging the many “social and political undertones” of the era had to have come into play.

• Educate yourself about your health.

• Don’t hesitate to ask questions of your medical doctor if there is something you don’t understand.

• In cases where your doctor says a medical problem exists or has been found, get an explanation that you understand.

• Get a second opinion from another doctor.

“There’s still a need for improvement on the front line,” Mr. Jones said, ticking off a list of continuing gaps in the health care system that are pervasive across the country. All people need a primary care physician, he said, but many don’t have one.

The public health agenda should focus on “access to food” and ridding communities of “food deserts,” he said. Localities also need to ensure “access to public transit” to ensure people in need of hospital service are able to get to it.

Mr. Jones, who has written three books on medicine in the military, said he believes health care is better now than during segregation, noting “all of the confusion, chaos and pain” stirred by transplant discord has been gradually resolved, starting in the 1970s.

Ethical oaths regarding transplant medicine and guidelines for notifying next of kin have been strengthened by medical organizations and an organ transplant system that has evolved, Mr. Jones said. In 1973, Virginia adopted a law defining “brain dead” in an attempt to clarify and complement established legal guidelines on “biological death,” he said. Gov. Wilder called the law a “form of redemption,” Mr. Jones wrote in his book.

While no national law has been adopted to require notification of kin in time-sensitive situations such as transplants, Mr. Jones said, he views the federal adoption of patient privacy laws, known as the HIPAA laws under the Health Insurance Portability and Accountability Act, as a step forward.