Attorney Benjamin J. Crump urges graduates to use their degrees, positions and voices to speak up for others 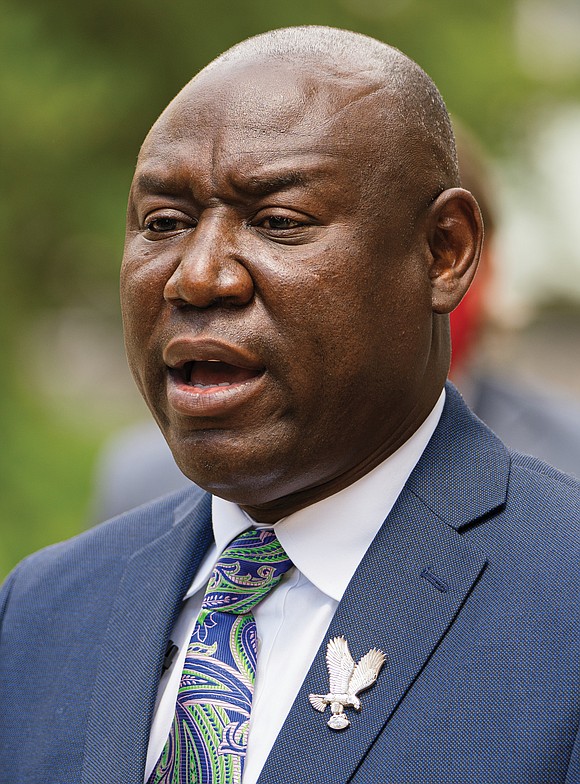 Mr. Crump, the self-proclaimed “Trial Lawyer for Justice” who represents the families of George Floyd, Breonna Taylor and many other Black people killed by police and white people in high publicity cases around the country, was unapologetic in his criti- cism of America’s treatment of Black people during his remarks, even as the world is in the grips of a global health crisis.

The Florida State University alumnus then doubled-down on this statement, telling VSU’s 790 graduates that they should feel especially proud to have endured not only the COVID-19 pandemic but also the pandemic of 1619, which has had Black people quarantined in systemic racism and oppression for more than 400 years.

It is this boldness that has established Mr. Crump as a strong voice against inequality and that also has opened the door for his Florida-based firm to pursue high-profile civil lawsuits on behalf of victims of brutality, including 17-year-old Trayvon Martin in Florida; Michael Brown, 18, in Ferguson, Mo.; and jogger Ahmaud Arbery, 25, in Glynn County, Ga.

Coincidentally, the 51-year-old litigator was in Richmond on Dec. 7 with two of Ms. Taylor’s aunts and Gov. Ralph S. Northam for the ceremonial signing of “Breonna’s Law.”

Ms. Taylor, 26, was fatally shot in her Louisville, Ky., apartment by police who broke down her door shortly after midnight on March 13 executing a search warrant.

Virginia’s new law, which goes into effect in March, bans the use of no-knock search warrants. It prohibits police from going into a home without first announcing themselves and limits search warrants of this kind to being served only during daylight hours.

After describing in graphic detail many other instances where deadly violence was perpetrated against Black people by the police, Mr. Crump urged the graduates and Black America to stand up and confront the nation’s hypocritical attitudes and laws.

“We must be prepared to ignore what is safe, what is politically correct and what is popular, to stand up and do what is right,” he added.

In addition to addressing the violence against African- Americans, Mr. Crump turned an accusing finger toward the U.S. criminal justice system as a whole, which he said dispro- portionately saddles African-American men and women with felony convictions.

The Lumberton, N.C., native went on to explain that he watches as white men and women walk out of court with a slap on the wrist, while Black people are liberally convicted of felonies, relegating them to a permanent underclass status.

“In every city, every state, every day, in every courtroom, they are killing our people softly with these trumped up felony convictions,” he said.

Mr. Crump then told graduates that all of these issues can be eradicated if they are willing to use their academic degrees, their positions and their voices to speak up for those who cannot speak for themselves.

“When you have an opportunity to speak truth to power — you do it, baby — you do it!”

He concluded his speech on an optimistic note, reminding graduates that African-Americans already have overcome the Middle Passage, slavery, the Three-fifths Compromise, the Dred Scott decision, Reconstruction, Jim Crow and police brutality.

“Based on the precedence, I have every confidence that whatever they throw at you in the world today, you will overcome it,” he told the graduates.

VSU President Makola M. Abdullah echoed Mr. Crump’s remarks, acknowledging the unprecedented challenges the Class of 2020 has faced on the road to graduation.

“I’m not sure that there is another class that is more prepared to lead than you,” Dr. Abdullah said.