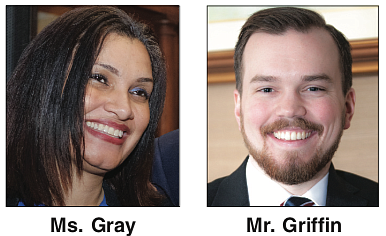 Justin Griffin, a Church Hill-based lawyer who played a key role as a resident in helping to kill the mayor’s $1.5 billion Coliseum replacement and Downtown redevelopment plan, announced that he is “seriously exploring” a run for mayor.

Mr. Griffin, 30, said he is reviewing the prospect based on requests from people who have urged him to make the run.

He garnered widespread attention in the past 15 months with his NoColiseum. com website, where he said he presented a “detailed and honest analysis” of the project that Ms. Gray, 49, opposed and played a leadership role on the council in voting down the project.

“In the end, I was proud to stand with a diverse group of concerned Richmonders, and together, we were successful in educating City Council on why this was a bad deal for the city,” he wrote in his announcement.

“Now that Mayor Stoney’s arena plan has finally been rejected, we must actu- ally do what we have always just talked about,” he continued.

In his view, Richmond’s elected officials have for years operated “with misplaced priorities. Instead of focusing with urgency on improving our schools and neighborhoods, they continue to spend all their time on big shiny projects and their political futures.

“No one in the current field of candidates would lead to a change in the status quo,” he stated. “Richmond deserves better.”