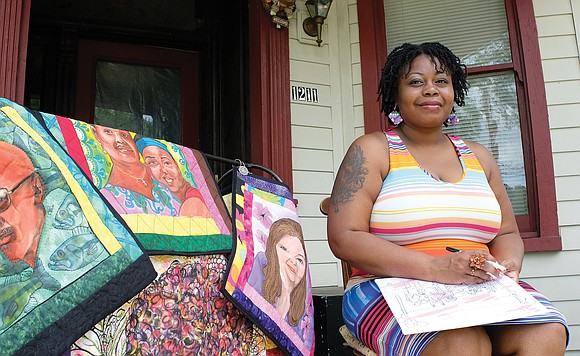 Unicia R. Buster displays some of her art quilts as she works from the front porch of her East End home on her poster design for the 32nd Annual 2nd Street Festival. Photo by Sandra Sellars

Artist Unicia R. Buster’s quilt art has been seen for years around Richmond and elsewhere.

Her work has been exhibited everywhere from Pine Camp’s Spotlight Gallery and VCU Health System in Downtown to galleries in Long Island City, N.Y., and Rome.

One of her early pieces, an 8 feet-by-11 feet quilt featuring 100-plus photos of families, was a vibrant and highly visible centerpiece for more than a decade at the Richmond Public Library’s Main Branch in Downtown.

Now Ms. Buster’s list of honors includes being selected to design the poster for the 32nd Annual 2nd Street Festival that celebrates the culture of historic Jackson Ward, at one time the center of black commerce and entertainment.

It’s a rare opportunity for Ms. Buster, who was contacted in February by Venture Richmond, the festival’s organizer. Her work will be completed and released virtually to the public, organizers said, despite the free, two-day event slated for October being canceled this week because of the coronavirus.

As both an artist and the great-grand-daughter of the late Jackson Ward resident Beatrice Lewis Jackson, Ms. Buster views the project as the confluence of her two major interests in a whole new way on a whole new stage.

“I love Jackson Ward,” Ms. Buster said, describing the neighborhood as a “building block” that continues to inspire to this day. “I love the historic nature of Jackson Ward. I love that it’s being preserved in that way. I love that our culture has a strong foundation for community that came out of that area.”

Organizers were pleased that Ms. Buster agreed to play a substantial role in their initial plans.

“You clearly see her passion, inspiration, beautiful colors and textures in her drawings, paintings, wall hangings and dolls,” wrote Sharon Bassard, booking and events manager for Venture Richmond, in an email. “Ms. Buster will be a great asset to the festival.”

A Richmond native, Ms. Buster was a fine arts major in photography at Cornell University, where she combined photography with fabric art to produce her senior thesis as a quilt.

She used a traditional process of photo transfer onto the fabric to produce her unique pieces. Now, printable fabrics and inkjet printers make the process easier, she said, with the colors more vibrant.

She is inspired, too, by the work of Faith Ringgold, a noted art quilts artist who often will paint fabric and then quilt it. A piece Ms. Ringgold was commissioned to do by Oprah Winfrey for poet Maya Angelou’s 61st birthday, called “Maya’ Quilt of Life,” sold at auction for $461,000 in 2015 after Ms. Angelou’s death. It was a record for a narrative quilt by the artist.

Early on, when Ms. Buster was 10, her aunt, Juanita Buster, took her to the Chrysler Museum in Norfolk for a quilting exhibi- tion, where she recalls being mesmerized by a quilt that also served as a Parcheesi board. In the museum’s gift shop, her aunt bought her a children’s book written and illustrated by Ms. Ringgold.

Ms. Buster, who has a master’s in graphic design from George Mason University and previously worked as a graphic designer at the Richmond Free Press, is now inspiring people on her own.

“It is important to keep our heritage going,” Ms. Buster said.

The poster reveal is tentatively scheduled for September.