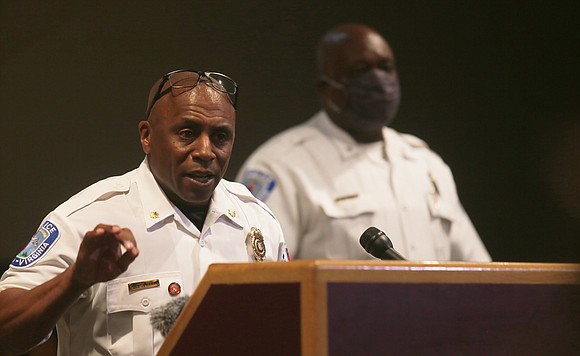 Interim Richmond Police Chief William V. “Jody” Blackwell is supposed to be the right person to focus on “necessary public safety reform, healing and trust building within the community.”

That is what Mayor Levar M. Stoney said when he announced June 16 that he asked then-Chief Will Smith to resign and promoted his chief of staff, Maj. Blackwell, to be the city’s top cop until a permanent replacement is selected.

After meeting with disgruntled police officers upset over Chief Smith’s abrupt dismissal, the mayor doubled down on his decision. He said Chief Blackwell has the discipline and composure the job needs, adding, “I know that he’s the man to get the job done.”

However, if Chief Blackwell was supposed to be out front making his presence felt, quite the opposite appears to be happening.

Instead, he has avoided making any public appearances — a sharp contrast for a city used to police chiefs who court the news media and are eager to be seen and heard around the city.

Chief Blackwell has rejected requests for interviews and has not turned out for major public events, including the Juneteenth celebrations last week during his first days at the helm.

It is not clear whether he has been out at demonstrations with his officers or what his role has been in ordering the firing of tear gas, pepper spray and rubber bullets to disperse protesters during several demonstrations earlier this week that the police declared an “unlawful assembly.”

It also is not clear whether Chief Blackwell has met with civic or business leaders, talked with members of City Council or begun building community connections to tackle the mayor’s plan for police reform.

At the same time, his ability to command community respect and allegiance might have been undermined from the start as his face and name were blasted on social media as an officer who killed a civilian.

At a moment when Richmond and other cities continued to be shaken by protests over police violence and racial bigotry ignited by a police officer killing George Floyd in Minneapolis, the discovery of that skeleton in Chief Blackwell’s closet has come at the wrong time.

As recounted in 18-year-old news articles, then-Officer Blackwell fatally shot Jeramy O. Gilliam, in 2002 during a burglary investigation in a neighborhood near Byrd Park.

As reported, Officer Black- well confronted Mr. Gilliam on Idlewood Avenue, three blocks from the burglary location, and asked for his ID, although Mr. Gilliam did not fit the description of the suspect broadcast by police.

Richmond’s Commonwealth’s Attorney at the time, former Judge David M. Hicks, took the case to the grand jury, which declined to indict the officer for involuntary manslaughter, keeping Chief Blackwell’s life and career on track.

Since then, Chief Blackwell has risen through ranks and held various positions, including successful leadership of the Fourth Precinct that covers Downtown and portions of North Side that drew department praise for crime reduction.

reforms in police training. Only one officer, Sgt. David Melvin, ultimately faced trial, and he was acquitted after juries twice deadlocked in earlier trials.

Mayor Stoney has said he knew about the Gilliam slaying when he appointed Chief Blackwell.

So far, members of City Council have stayed mum about the new interim chief and his personnel record. The appointment was solely within the mayor’s discretion, with the council having no formal say.

However, since the Gilliam killing was unearthed, plenty of other people have expressed dismay over Chief Blackwell’s appointment, including members of the General Assembly and Petersburg native R&B singer Trey Songz, who just days after dining with Mayor Stoney and Councilman Jones in Richmond last weekend, called for the mayor to resign as a result of the appointment.

Separately, the family of Mr. Gilliam also expressed surprise and dismay that the man who killed their loved one is now leading the Richmond Police Department.

In a letter that went public, the family said they were told in 2002 that Chief Blackwell had left the city police department, although that was not the case.

“We had no doubt about the integrity of Mr. Blackwell; now we question Mayor Levar Stoney’s integrity,” the letter reads. “Maybe it’s time for him to step down!”

Richmond For All, a member-driven political group, was among a host of organizations that weighed in. The group tweeted that the appointment of Chief Blackwell “reinforces what the public already know: Justice lies in the hands of the people not the police. Com- munity oversight now.”

Meanwhile, John I. Dixon III, president of the Richmond Crusade for Voters and a former Petersburg Police chief and former Richmond officer, is hoping that Mayor Stoney’s plans for reform are not derailed by the focus on the new chief’s past.

“I welcome the call for reform,” Mr. Dixon said. “What is needed is a change from the warrior mentality in the police to a guardian mentality. The calls for reform are sweeping the country and the world, and Richmond needs to be part of this movement.”

Mr. Dixon, who did not want to comment specifically on Chief Blackwell’s past, said the mayor correctly spotlighted the problem — that the police are being involved in too many areas, ranging from domestic abuse to drug treatment to mental health and homelessness.