Only one player at HBCU drafted into NFL 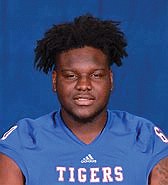 The once busy football pipeline between HBCUs and the NFL appears to have stalled.

Out of seven rounds and 255 selections in the NFL’s virtual draft last month, only one HBCU athlete heard his name called.

The lone HBCU player drafted by the NFL was offensive guard Lachavious Simmons out of Tennessee State University. Simmons was picked in the seventh round by the Chicago Bears and 227th overall.

And consider that Tennessee State, which is in the Ohio Valley Conference, and Hampton University of the Big South Conference are the only NCAA Division I schools not in an HBCU conference.

Among those not drafted, surprisingly, was Alex Taylor, the 6-foot-9, 308-pound offensive lineman from South Carolina State University.

Taylor was the only HBCU talent invited to attend the NFL Combine in Indianapolis. Taylor was also the lone HBCU player to receive an invitation to the Senior and East-West All-Star games.

Taylor has since signed as a free agent with the Cleveland Browns.

The coronavirus pandemic may have contributed to the disappointing draft news.

A special HBCU Combine set for March 27 and 28 in Miami was canceled because of the virus.

Among those invited to the south Florida showcase were defensive back Sterling Hammond from Virginia Union University, quarterback Deondre Francois from Hampton University and linebacker Nigel Chavis from Norfolk State University. Chavis is a former Armstrong High School standout.

Additionally, all in-person interviews were scratched because of the COVID-19 crisis. That means no NFL scouts went to college campuses and no athletes traveled to NFL facilities.

But times have changed. Nowadays, the draft has become more the private property of the Power Five conferences.

Five first round selections in the NFL draft were from Louisiana State University, followed by the University of Alabama with four, Ohio State with three, and Georgia, Auburn, Clemson, Oklahoma and Texas Christian with two each.

As a tradition, the last player picked in the NFL draft is labeled “Mr. Irrelevant.” This year, that dubious honor went to linebacker Tae Crowder from the University of Georgia.