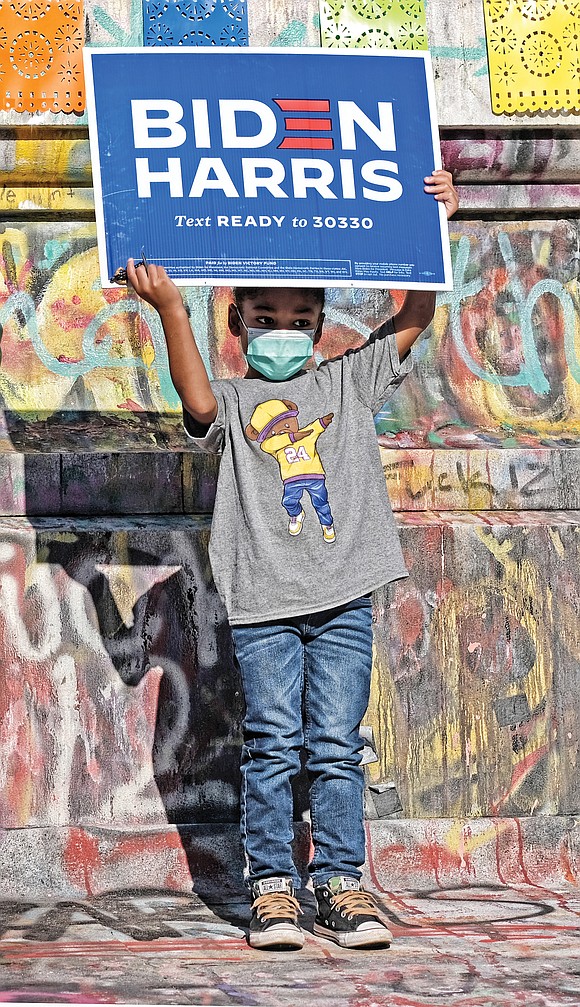 Aiden Porter holds up a biden-Harris campaign sign Saturday in celebration of the Democrats’ victory in the presidential election. The 4-year-old stood at the base of the Lee statue on Monument Avenue, where he was celebrating with his mother, Jasmine Howell. Photo by Sandra Sellars

Democrat Joe Biden is calling this “a time for healing” in claiming victory in the 2020 presidential election.

“Folks, the people of this nation have spoken. They’ve delivered us a clear victory,” the 77-year-old president-elect said Saturday evening from Wilmington, Del., as he stood with his running mate and future vice president, U.S. Sen. Kamala Harris, who will be the first woman, first Black and first South Asian to fill the nation’s second highest office.

In the wake of the knock-down, drag-out battle for the top office against President Trump, Mr. Biden urged Americans to come together.

That may be tough in a nation that appears to be engaged in a political civil war, cleaved between the red Republicans and blue Democrats.

Though counts continue in some parts of the country and with states yet to officially certify results, Mr. Biden, a former senator and former vice president, declared victory after multiple news organizations on Saturday reported that he had won Pennsylvania and its 20 electoral votes, giving the Democratic ticket the 270-vote majority in the Electoral College needed to beat incumbent President Trump.

Early analysis shows that high numbers of Black and Latino voters went to the polls, most notably in key battleground states, including Michigan, Arizona and Georgia, enabling Mr. Biden to overcome, albeit narrowly, a Republican surge on Election Day.

If the votes are confirmed and certified, the divisive President Trump, who has undermined the office and turned lies and insults into badges of honor, would be the first sitting president to lose re-election since George H.W. Bush in 1992.

Still, President Trump has yet to concede. On Wednesday, he was still declaring himself the winner backed by a chorus of GOP sycophants echoing that theme. He also is blocking Mr. Biden from gaining resources or cooperation to begin the transition. And he has joined with the likes of Sen. Lindsay Graham of South Carolina and Sen. Ted Cruz of Texas to try to undermine the results with claims of election fraud without any evidence — even in states where Republicans control the legislatures, such as Wisconsin and Pennsylvania.

That message is being heard loud and clear by Trump supporters who are dismayed their hero did not win.

While there was jubilation over the outcome of the presidential race in places like Richmond, Atlanta, Detroit and Washington that strongly backed President-elect Biden, there were counter-demonstrations in Trump country where people are holding up “Stop the Fraud” signs and banners.

Recounts are likely in several key states, including Georgia, where a hand-count has been ordered of every presidential ballot after President Trump failed to win. The final, official result of the election also will take time as President Trump’s legal team files a wave of lawsuits seeking to make the outcome appear illegitimate — though he has yet to find a judge to accept any of his team’s arguments.

It looks like Mr. Biden scored a big victory.According to national data, a record 150 million people participated in the election, with Mr. Biden leading in the popular vote. Currently, he has about 77 million votes to about 72 million for President Trump, a record for both winner and loser.

The total turnout also hit 66.3 percent of the electorate, the highest level since 1908.

But that still means 75 million registered voters did not cast ballots.

As various election watchers have noted, the projected Democratic landslide never materialized and that is likely to leave Mr. Biden and Democrats in a far weaker position after he takes office Jan. 20.

Notably, Republicans kept control of legislatures in Texas and other key states that Democrats hoped to flip and the winners now will be able to use new 2020 Census data to retain power through gerrymandering and new voter suppression laws.

Even worse, Democrats gained a net of just one new U.S. Senate seat, according to results from around the country, not the three needed to gain control of the Senate, which votes on presidential nominees to the U.S. Supreme Court, all federal courts and other top government positions.

Democrats’ only chance to get to 50 Senate seats so that Sen. Harris could break ties when she takes over in January as vice president and presiding officer of the Senate is to win both Georgia seats. Runoffs are to be held for both Georgia Senate seats on Jan. 5.

While Mr. Biden narrowly won the state, the smart money is betting that Republicans will win both seats, giving the GOP a 51-49 margin. If that happens, Sen. Mitch McConnell of Kentucky will remain majority leader and could ensure that Mr. Biden faces the same gridlock he created to thwart President Obama.