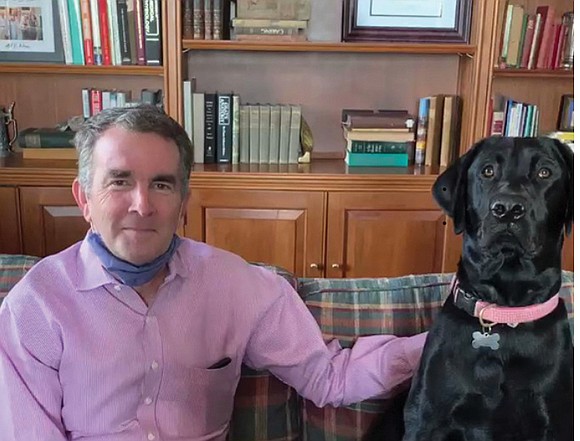 Gov. Ralph S. Northam and First Lady Pamela Northam remain in isolation for the coronavirus this week in the Executive Mansion after the governor, who was asymptomatic after first testing positive for COVID-19, developed symptoms over the weekend.

In a video message posted to social media on Monday, Gov. Northam said he developed “mild, cold-like symptoms” during the weekend and lost his sense of smell.

Mrs. Northam was showing mild symptoms of the virus, officials said, after the couple found out on Sept. 24 that they tested positive for the virus.

Gov. Northam, a 61-year- old physician, is monitoring his symptoms along with doctors, and helping state and local health officials as they trace the couple’s contacts before learning they were positive for the virus.

Currently, contact tracing by the Virginia Department of Health and the Richmond and Henrico health districts have identified around 65 individuals who were in close contact with the Northams prior to their diagnoses, according to the state health department. None of those individuals have tested positive for COVID-19 as of Monday, officials said.

Nevertheless, all close contacts have been instructed to quarantine for 14 days and self-monitor for symptoms.

The first couple was alerted the evening of Sept. 23 that a staff member working in the couple’s living quarters at the Executive Mansion tested positive for COVID-19. The Northams then were tested, with results received in 24 hours showing they were positive for the virus, according to local health officials. They immediately went into isolation in the Executive Mansion and contact tracing efforts began. Both the governor and his wife had participated in public events around the state just days before.

The state health department noted this week that two other staff members working in the executive residence tested positive for COVID-19 at the same time as the Northams. With so many members of the residence staff and security staff in close contact with one or more of the positive staffers, it may be difficult to figure out which exposure led to infection, officials said.

The Northams seem to be taking their isolation in stride, with Gov. Northam delivering Monday’s video message with their dog, Pearl, seated next to him on their sofa.

The governor said that, despite developing new symptoms, he and Mrs. Northam are “doing well and staying in good spirits.” He thanked people across Virginia for their well wishes and prayers.

“It does great to keep us in good spirits,” he said.

Gov. Northam initially was scheduled to end isolation on Monday, but the emergence of symptoms during the weekend requires him to isolate for at least 10 days starting with their onset, officials said.

While Mrs. Northam’s symptoms have improved, she and health officials opted to have her follow Gov. Northam’s isolation schedule, officials in the Governor’s Office said Wednesday.

Regardless of his current circumstances, Gov. Northam said in his message that work continues on Virginia’s COVID-19 response, criminal justice reform and final revisions to the state budget. He also urged Virginians to take the virus seriously and stay vigilant as the pandemic continues.

“I encourage you to continue to wear your mask. Continue to wash your hands, keep your social distance and most importantly, take care of yourselves,” Gov. Northam said. “Take care of your family, your loved ones and your friends. We’re going to get through this together.”

In an interview with The Washington Post, Gov. Northam also criticized President Trump, who is recovering from COVID-19 after being hospitalized for three days at Walter Reed National Military Medical Center, for his tweets on Monday telling the American people, “Don’t be afraid of Covid. Don’t let it dominate your life. We have developed, under the Trump Administration, some really great drugs & knowledge.”

Gov. Northam called the president’s message “irresponsible,” citing the more than 200,000 deaths in the nation from the coronavirus.

The governor also noted that President Trump “has access to the best medical care, medications, treatments other people don’t have access to.”