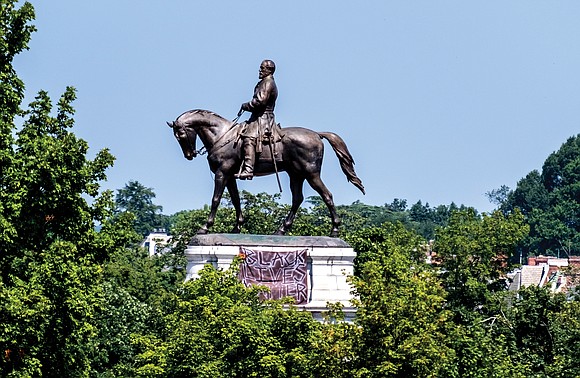 Richmond Circuit Court Judge W. Reilly Marchant’s ruling allows the six-story statue of Confederate Gen. Robert e. Lee to remain in place on Monument Avenue until the lawsuit over its removal is heard on appeal to the Virginia Supreme Court. Photo by Sandra Sellars

Virginia is finally washing its hands of Robert E. Lee, 150 years after his death.

Long venerated as a symbol of white supremacy, the giant six-story statue of the slavery- defending Confederate general on horseback on Monument Avenue — whose giant stone pedestal has been artfully and colorfully transformed in recent months into a symbol of protest against racism — appears to be on its way out.

Reflecting the sea change in public values, a Richmond Circuit Court judge ruled this week that Gov. Ralph S. Northam has the authority to remove the towering monument that has stood for 130 years at the intersection of Monument and Allen avenues in the near West End.

Judge W. Reilly Marchant, who spent three months blocking the statue’s removal, astonished supporters of the monument and its 21-foot-tall metal statue of the Confederate leader.

In a 13-page decision issued on Tuesday, Judge Marchant ruled that Virginia’s public policy has changed and no longer supports keeping the statue.

It is the last large Confederate icon on city streets. The City of Richmond already has removed virtually all of the statues and icons it owned and displayed and most are being put up for sale.

Despite his ruling, Judge Marchant continued to bar the governor from taking action. The judge ordered the statue to remain untouched to give three property owners, who sued the governor in a bid to stop removal, time to appeal his ruling to the state Supreme Court, which will have the final word.

Still, Gov. Northam and Attorney General Mark R. Herring hailed the ruling as a victory nearly five months after the governor declared that “Richmond is no longer the capital of the Confederacy” and announced that the state-owned Lee statue would be taken down.

“The Lee Monument was built to celebrate the Confederacy and uphold white supremacy,” Gov. Northam noted in a celebratory statement. “This victory moves Virginia forward in removing this relic of the past — one that was erected for all the wrong reasons.”

Mr. Herring, whose legal team led by state Solicitor General Toby J. Heytens provided the convincing arguments, stated, “The Lee statue does not represent who we have become as Virginians, and it sends the wrong message to the rest of the world that we continue to venerate an individual who fought to maintain the enslavement of human beings.”

While Judge Marchant heard hours of testimony and argument last week as he weighed the fate of the statue, his decision was grounded in just 14 words.

Those words: “Notwithstanding the provisions of Acts of Assembly, 1889 Chapter 24, which is hereby repealed.”

Those words are found in the revamped state budget that passed the state Senate and House of Delegates on Oct. 16 and are attached to language instructing the state Department of General Services to remove the Lee statue.

Those words eliminated what Judge Marchant had previously declared was the state’s policy toward the statue — an 1889 joint resolution of the legislature “requesting and authorizing the governor to accept the gift of the Lee Monument from the Lee Monument Association” and including a “guarantee” that the monument would be held “sacred to the monumental purpose to which it had been devoted” in perpetuity.

Describing the General Assembly as “the sole author of public policy” based on state Supreme Court precedent, Judge Marchant found that the approval of those 14 words “clearly indicate” the General Assembly and the commonwealth want to remove that statue. He found, as a result, that restrictive covenants contained in deeds barring any change to the statue are now void.

But the judge did reject arguments from Patrick M. McSweeney, who led the plaintiffs’ legal team, that the legislature’s action was unconstitutional. In Mr. McSweeney’s view, the judge got it wrong, and he already has said his clients want to appeal.

Judge Marchant noted that the General Assembly’s passage of the 14 words granted the governor authority to act. He said before that passage, he was prepared to rule against the governor.

But that statement of public policy, he wrote, changed the situation.