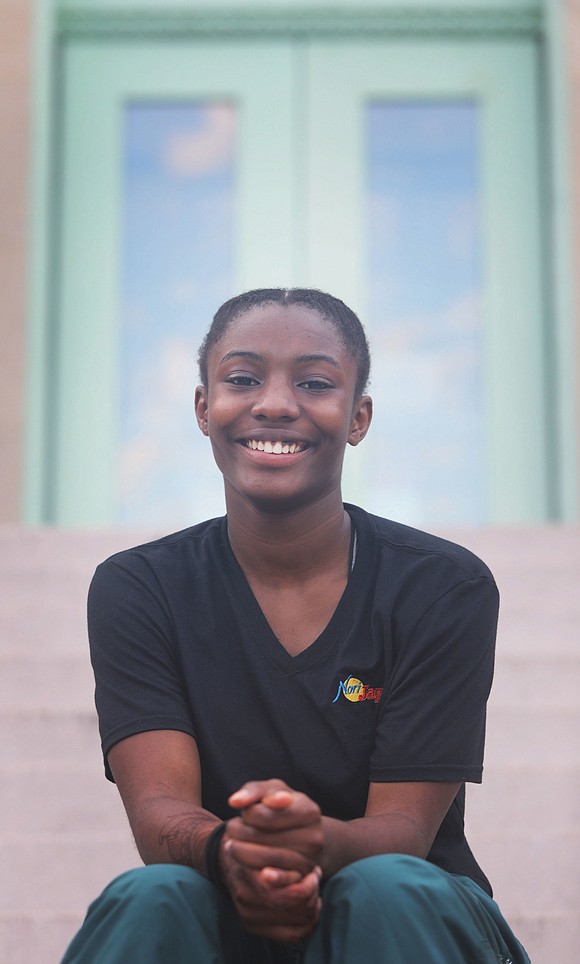 Ghamani Hogue looks at track and field meets as being like an all-you-can-eat buffet.

And she comes hungry.

The Maggie L. Walker Governor’s School senior put on a show to remember March 2 at Liberty University, placing in five events and helping the Dragons to the State 3A runner-up finish.

“She was almost like a one-girl track team that day,” said veteran Walker Coach Jim Holdren.

Like a 5-foot-4 whirlwind in Walker green and gold togs and flowing blue braids, Hogue won the 55-meter hurdles in 8.78 seconds.

Prior to the hurdles, she was fifth in the long jump (15-4 1⁄2) and sixth in the triple jump (33-7 3⁄4), no easy task considering the events were held simultaneously on different runways.

“From the moment I entered the facility, I was doing stuff non-stop,” Hogue said. “I just kept going back and forth.”

With Hogue the primary contributor, Walker scored 46 points, second behind Western Albemarle in a 28-school field from around the Commonwealth.

“That’s another thing about Ghamani,” said Coach Holdren. “She can also pole vault, although we didn’t use her in that because she had so many other events.”

Normally a two-day event, the state meet was held in one day due to pandemic modifications. That meant less recovery time between events.

Hogue was born in New York City and lived in Chesterfield County and Petersburg before her family settled in Hopewell. She commutes some 23 miles one way from Hopewell to Walker’s Lombardy Street campus each day.

Walker is a regional school requiring an ap- plication process. Only the brightest and most talented are accepted.

“I remember how overjoyed I was when I got my Governor’s School acceptance,” Hogue said. “I was ecstatic.”

Rarely does she leave for home at the sound of the final school bell. Along with indoor and outdoor track, she is a front line performer on the Dragons’ volleyball team.

Hogue’s track and field roots can be traced to when she was an eighth-grader at Hopewell’s Carter G. Woodson Middle School. She was able to compete for Hopewell High School on the “sub varsity” team. Her scores did not count in the varsity meets, yet she made an impression.

Coach Holdren, who rarely knows of his athletes until they arrive on campus as freshmen, recalls getting “either an e-mail or text” from the Hopewell coaching staff.

“They told me I was getting a special young lady,” said Coach Holdren.

“In this case, special was an understatement. I lucked out on Ghamani.”